Childhood eating difficulties could be a sign of underlying psychological issues 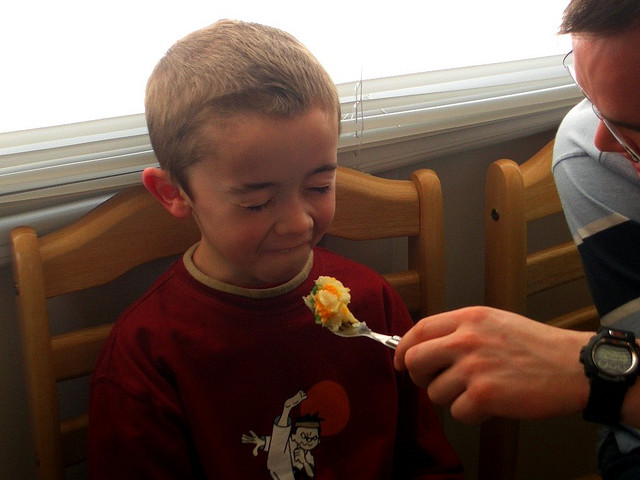 Researchers at the University of Montreal and its affiliated CHU Sainte-Justine children's hospital are warning parents that difficult eaters could have underlying psychological issues, as they have found that restrictive behaviours can appear before puberty. "Many researchers believe that bulimia only appears at adolescence, but our studies indicate that the problem can arises much earlier. It is possible that it is currently under-diagnosed due to a lack of awareness and investigation," explained clinical psychologist and Professor Dominique Meilleur, who led the study. The findings, presented yesterday evening at the Eating Disorders Association of Canada conference in Vancouver, raise questions about the way eating disorders develop and are diagnosed.

Meilleur and her colleagues Olivier Jamoulle, Danielle Taddeo and Jean-Yves Frappier came to their conclusions by studying the psychological, socio-demographic and physiological characteristics of 215 eight to twelve year olds with eating problems. Kids with physical issues that could cause eating problems, such as diabetes or cystic fibrosis, were excluded from the study. The researchers found that the children often suffered from other problems: in particular, anxiety and mood disorders and attention deficiency. "More than 15.5% of the children in the study made themselves vomit occasionally and 13.3% presented bulimic behaviours. These results are very concerning but they may help clinicians reach a diagnosis earlier by enabling them to investigate these aspects," Meilleur said. Treatment of these conditions should start as early as possible.

Across the study, 52% of the children had been hospitalized at least once due to their eating problem and 48% had been treated as outpatients emergency responders. "The fact that most children had been hospitalised upon contact with medical services suggests that the children's physical health was precarious. It is also worth noting that psychiatric issues were present in the families of 36.3% of the study participants," Meilleur explained.

Children have been discussing their anxieties and fears surrounding their weight, body image, eating and other personal issues with Prof Meilleur for twenty years, enabling her to acquire considerable expertise in eating disorders in children and teenagers. "Many factors are associated with the development and persistence of eating disorders," Meilleur explained. The results of this study indicate that 22.7% of the children identify having been mocked or insulted for his or her appearance as a trigger event to the modification of their behaviours. "For some children, bullying can initiate or reinforce boy image preoccupations and possibly lead to a change in eating behaviour."

Indeed, 95% of the children in the study had restrictive eating behaviours, 69.4% were afraid of putting on weight, and 46.6% described themselves as "fat." "These behaviours reflect the clinical presentations we observe in adolescents and support findings that body image is a preoccupation for some children as early as elementary school," Meilleur explained.

Finally, the study found that eating disorders are not a "girl problem." Boys in the same age group were found to be similar to girls in most cases, the exception being the link with social isolation, which was greater and lengthier for boys. "The profound similarity between boys and girls supports, in our opinion, the hypothesis that common psychological and physical factors linked, amongst other things, to the developmental period, are involved in the development of an eating disorder," Meilleur said.