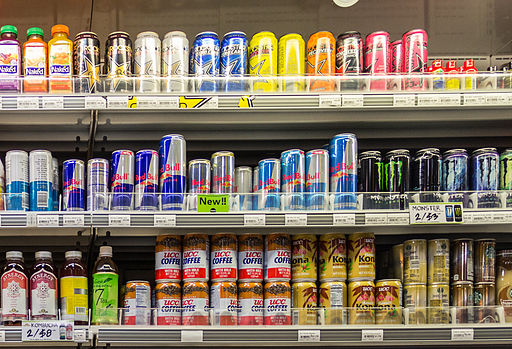 (Photo credit: Dietmar Rabich via Wikimedia Commons)​
Middle-school children who consume heavily sweetened energy drinks are 66% more likely to be at risk for hyperactivity and inattention symptoms, a new study led by the Yale School of Public Health has found.

The finding has implications for school success and lends support to existing recommendations to limit the amount of sweetened beverages schoolchildren drink. The authors also recommend that children avoid energy drinks, which in addition to high levels of sugar also often contain caffeine. The study is published in the journal Academic Pediatrics.

The research team -- led by professor Jeannette Ickovics, director of CARE (Community Alliance for Research and Engagement) at the School of Public Health -- surveyed 1,649 middle-school students randomly selected from a single urban school district in Connecticut.

"As the total number of sugar-sweetened beverages increased, so too did risk for hyperactivity and inattention symptoms among our middle-school students. Importantly, it appears that energy drinks are driving this association," said Ickovics. "Our results support the American Academy of Pediatrics recommendation that parents should limit consumption of sweetened beverages and that children should not consume any energy drinks."

While more research is needed to better understand the effects and mechanisms linking sweetened beverages and hyperactivity, previous research has shown a strong correlation between children with attention deficit hyperactivity disorder (ADHD) and poor academic outcomes, greater difficulties with peer relationships, and increased susceptibility to injuries. These associations are understudied among minority children, notes Ickovics, and previous research has suggested under-diagnosis of ADHD in black and Hispanic children.

Some sugar-sweetened beverages and energy drinks that are popular with students contain up to 40 grams of sugar. The students in this study consumed on average two sugared drinks per day, with a range of zero to seven or more drinks. Health experts recommend that children consume a maximum of 21 to 33 grams of sugar daily (depending on age).

In addition to hyperactivity and inattention, heavily sugared beverages also impact childhood obesity, notes Ickovics, and sugar-sweetened beverages are a leading cause of added calories in the diets of obese children. Currently, about one-third of American schoolchildren are considered overweight or obese.

Published in the journal Academic Pediatrics.


This article is not intended to provide medical advice, diagnosis or treatment. Views expressed here do not necessarily reflect those of ConductDisorders or its staff.
Top