For children with autism, trips to the dentist just got easier 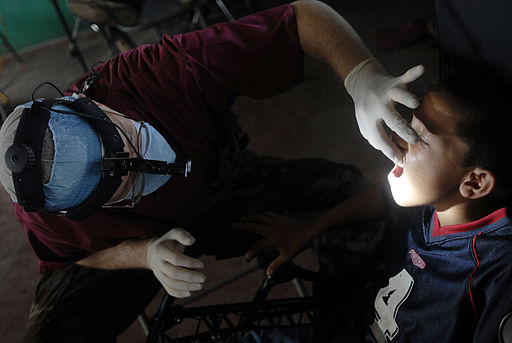 (Photo: Public Domain via Wikimedia)​
Adjusting the environment to be more soothing could eliminate the need for general anesthesia to cope with routine cleanings

Going to the dentist might have just gotten a little less scary for the estimated 1 in 68 U.S. children with autism spectrum disorder as well as children with dental anxiety, thanks to new research from USC.

In an article published by the Journal of Autism and Developmental Disorders, researchers from USC and Children's Hospital Los Angeles (CHLA) examined the feasibility of adapting dental environments to be more calming for children with autism spectrum disorder.

"The regular dental environment can be quite frightening for children with autism who, not knowing how to react, tend to be completely averse to whatever we're trying to do," said one of the study's authors, José Polido DDS, head of dentistry at CHLA and assistant professor at the Herman Ostrow School of Dentistry of USC.

Children with autism spectrum disorders -- as well as some typically developing children -- often show heightened responses to sensory input and find these sensations uncomfortable. As such, the dental office, with its bright lights, loud sounds from the dental equipment, and touch of children in and around the mouth, present particular challenges for such children.

In the study, 44 CHLA patients -- 22 with autism and 22 "typically developing" (defined as children not on the autism spectrum)--underwent two professional dental cleanings. One cleaning took place in a regular dental environment, the other in a sensory adapted dental environment. During each session, the child's physiological anxiety, behavioral distress and pain intensity were measured.

"I've talked to several parents who have said, 'We really put off taking our child to the dentist because we know how hard it is and we know he's going to scream and cry,'" said Sharon Cermak, the study's lead author and professor at the USC Mrs. T.H. Chan Division of Occupational Science and Occupational Therapy, as well as professor of pediatrics at the Keck School of Medicine of USC.

To help combat that reaction, researchers adapted the dental environments by turning off overhead office lights and headlamps, projecting slow-moving visual effects onto the ceiling and playing soothing music.

Instead of using traditional means to secure the child in the dental chair, practitioners used a seat cover that looked like a gigantic butterfly whose wings wrapped around the child and provided a comforting, deep-pressure hug.

The research team found that both children who are typically developing as well as those with autism spectrum disorders exhibited decreased psychological anxiety and reported lower pain and sensory discomfort in the sensory-adapted dental environment.

The study -- which represents a unique collaboration between pediatric dentists and occupational therapists--could help improve oral health care for children with autism -- a group reported to suffer from poor oral health, research shows.

The findings could also represent a cost savings to the health care system, with fewer insurance reimbursements paid to dental offices for the additional staff members and general anesthesia often necessary for children with autism.

Next up for the researchers is to increase their sample size -- they'll be using 110 children in each group -- to determine which factors (e.g. age, anxiety, sensory over-responsitivity) best predict which children respond best to the intervention.

"One of our long-term goals with this study is to help dentists develop protocols for their own dental clinics to see how sensory components are contributing to behavioral issues," Cermak said. "I think these protocols can then be translated across the globe."