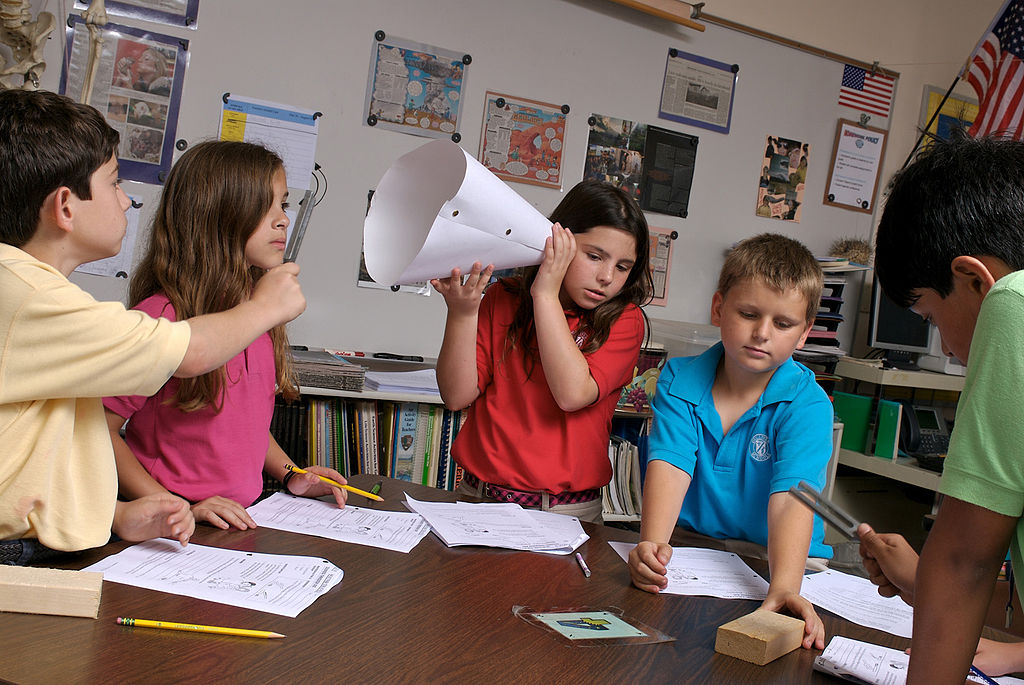 (Photo credit: Gulliver Schools [CC BY 2.5 (http://creativecommons.org/licenses/by/2.5) ], via Wikimedia)​
Children who participate in collaborative group work to learn about significant social issues become better decision-makers than their peers who learn the same curriculum through teacher-led discussions, a new study finds.

More than 760 fifth-grade students were involved in the study, which compared the efficacy of collaborative group work with conventional direct instruction at promoting students' ability to make reasoned decisions and apply those skills in a novel task.

The students studied a six-week curriculum in which they explored whether a community should hire professional hunters to kill a pack of wolves that was causing many residents concern. Students examined various perspectives on the issue, including the potential impact on the ecosystem, the local economy and public policy.

The curriculum's purpose was not to lead students to a predetermined best answer but to raise their awareness about making responsible and reasoned decisions, said Xin Zhang, a doctoral student in psychology at the University of Illinois and the lead author on the paper.

After completing the wolf curriculum, the students wrote two individual essays: one that explained their personal decision on what should be done about the wolf pack, and another about their decision on an unrelated moral dilemma between two friends, presented in the story "The Pinewood Derby."

In the story, a boy named Jack has an unpopular friend named Thomas who wins a pinewood derby competition but later confesses to Jack that he violated the rules by enlisting his older brother's help in building his car. After reading the story, the students were asked to write an essay about whether Jack should reveal his friend's dishonesty.

Children who had worked in collaborative groups on the wolf project were better prepared to take on the role of decision-maker about Jack's moral dilemma with his friend Thomas, the researchers found.

These children were more proficient at three key aspects of decision-making: recognizing more than one side of a dilemma, considering a range of reasons to support differing viewpoints, and weighing the costs and benefits associated with different decisions, according to the researchers.

These children appealed to a significantly greater number of moral principles and practical considerations when drawing conclusions about the action Jack should take, the researchers found.

By contrast, students who studied the wolf curriculum in teacher-led discussions were no better at making a decision on Jack's dilemma than children in the control groups who had not been exposed to the wolf project, according to the study.

"Collaborative group work positions students as active decision-makers, whereas direct instruction places them in a passive role, following the reasoning of their teacher," Zhang said. "We further theorize that the essential difference between collaborative group work and direct instruction is that students learn about the 'self as agent and others as (the) audience,''' a hypothesis explored in another paper by Zhang's co-authors, Richard C. Anderson, director of the Center for the Study of Reading, and graduate student Joshua A. Morris, both of the U. of I.

The researchers found girls were significantly better than boys at recognizing Jack's predicament and were more likely to weigh reasons when considering opposing viewpoints, but suggested that these gender differences could be related to girls' better writing ability.

Because the moral dilemma with the two boys had little in common with the wolf exercise, students' reasoning on whether Jack should tell on his friend Thomas provided strong evidence as to which children were competent decision-makers and were able to apply those skills in an unrelated situation, the researchers wrote.

The children in the study were from eight public schools that serve predominantly low-income families and were well below the national average in academic attainment, as measured by reading comprehension, according to the study.

While the Common Core standards emphasize development of reasoning and critical-thinking skills, the standards' perpetuation of a test-driven accountability system and teacher-directed learning environment compromises children's development of these higher-order skills. This can be especially detrimental in schools with large enrollments of minority and low-income populations, which may devote the majority of instructional time to arithmetic exercises and simple reading strategies, the researchers wrote.

"If children are to become thoughtful decision-makers, they need more time in the school day for collaborative group work that involves active reasoning about significant issues," Zhang said. "Promoting active reasoning is one key to cultivating disadvantaged students' development of intellective competence and academic ability."

runawaybunny said:
Children who participate in collaborative group work to learn about significant social issues become better decision-makers than their peers who learn the same curriculum through teacher-led discussions, a new study finds.
Click to expand...

OK. I can see where that works with neuro-typical kids.

What does "collaborative group work" do to our non-neurotypical kids? It destroys them. Because there alternative thought processes don't fit - at ALL - in a collaborative model. They are told they are "stupid", told to "shut up", shunned. The best teachers cannot overcome the normal reactions of neurotypical kids. (The worst ones support the neurotypical bullies.)

The point being... at some point we HAVE to stop trying to create an "education system" that is expected to meet all needs. Right now, every change made in a positive direction is having an equally (or more) impact in a negative direction.