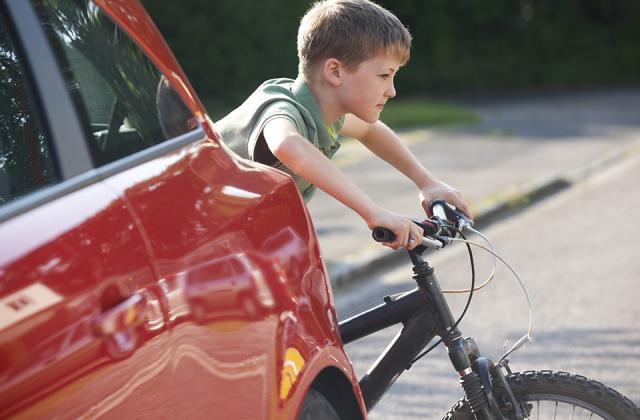 (Photo Credit: iStockPhoto/MachineHeadz., usage restrictions none)​
New University of Iowa study finds kids with ADHD have more bicycle accidents at busy intersections because they're impulsive and struggle to pay attention

Child development experts have long known that children with attention-deficit hyperactivity disorder are more likely to have an accident while crossing the street on their bicycles.

Now, researchers at the University of Iowa have discovered the reasons why and are hoping this information will help parents teach their children with ADHD how to better navigate busy intersections.

"Crossing roads on a bicycle requires decision and action," says Molly Nikolas, an assistant professor in the UI Department of Psychological & Brain Sciences and corresponding author of the study. "What we found is children with ADHD have deficits in both areas."

ADHD is a common, developmentally persistent neurodevelopmental disorder that, according the Centers for Disease Control and Prevention, affects 5.9 million children between the ages of 3 and 17 in the United States.

UI Researchers studied how 63 children--27 with ADHD--crossed 12 intersections with continuous cross traffic while riding in a real-time bicycle simulator. The children, between the ages of 10 and 14, rode stationary bikes surrounded by three 10-by-8-foot screens that projected images of a typical Midwest town.

However, following exposure to heavy traffic with shorter gaps between cars, the children with ADHD struggled to adjust their behavior when the traffic eased up and wider gaps were once again available. Instead of waiting for these larger gaps, the children with ADHD continued to choose the shorter gaps, on average, more than the non-ADHD youth--thus, putting themselves at unnecessary risk.

"What we found is the timing issues were more related to symptoms of inattention while the decisions about which gaps to cross were related to hyperactivity and impulsivity--all core symptoms of ADHD," Nikolas says.

None of the children with ADHD were on medication at the time of the study.

Researchers say the best way to help children with ADHD cross busy intersections may not be to focus on their timing deficits, but rather teaching them to look for the longer gaps between cars, no matter how dense the traffic.

"Even if their timing remains off, if they have a big enough gap, they will be OK," Nikolas says. "If we can have some intervention or prevention strategies that focus on the decision making, that may help compensate for the timing deficit."

The study, "Risky Bicycling Behavior Among Youth With and Without Attention-Deficit Hyperactivity Disorder," was published this month in the Journal of Child Psychology and Psychiatry.

According to the study, "Bicycle crashes are among the most common causes of severe injuries in childhood. Nearly 400,000 children are treated at emergency rooms yearly for bicycle-related injuries in the U.S."

Though the UI study looked only at the risks children take while crossing intersections, experts already knew that children with ADHD are twice as likely as others their age to be involved in any type of bicycle crash.

But that's where most of the research has stopped, says Nikolas, who is interested in uncovering why children with ADHD have so many more unintentional injuries than their peers.

"What is it about their disorder, the symptoms that they have, that may increase injury?" says Nikolas. "If we can identify how that works, we can develop more targeted prevention strategies.

"So instead of telling families, 'Hey, watch out, your child has ADHD,'" she adds, "we can give families more skills in terms of what they might be able to do to help their child."

Russell Barkley, a clinical psychologist at the Medical University of South Carolina and author of several books about ADHD, recommends parents gradually expose their children with ADHD to different scenarios while bicycling. He also says ADHD medications also can help some children.

"It has shown to decrease general accidental injury risks in ADHD youth by 31 percent to 43 percent over untreated ADHD populations by age 10 to 12," he says. "It has also improved the driving performance of ADHD teens and young adults."

Nikolas says future studies will look at how children with ADHD, both on and off medication, perform in the bicycling simulator, as well as the influence of peers while bicycling.