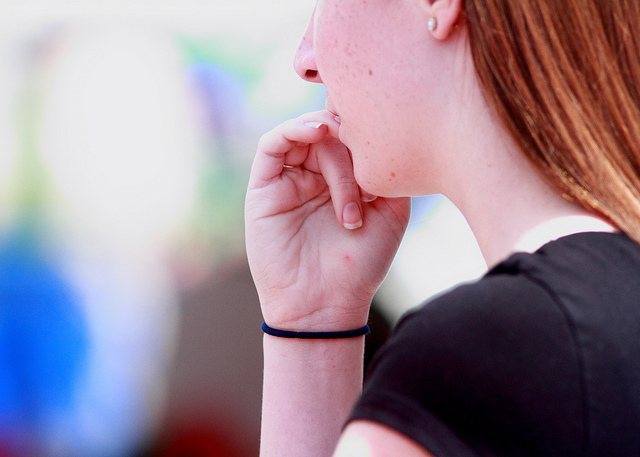 (Image credit: Pabak Sarkar via flickr, cc 2.0) ​
Adolescence is typically regarded as a period of heightened emotionality. Although the teen years are an important time for youth to learn to regulate their emotions, little research has looked at the development of teens' emotional stability. Now a new longitudinal study has found that adolescents' mood swings decline gradually as they get older, which should reassure parents about their moody teens while also helping identify when instability is considered risky and requires intervention.

The study, conducted by researchers at VU University Amsterdam, the EMGO Institute for Health and Care Research, Utrecht University, and Tilburg University, all in the Netherlands, appears in the journal Child Development.

"We found that early adolescence is the period of the greatest volatility, but adolescents gradually stabilize in their moods," according to Hans M. Koot, professor of developmental psychology at VU University Amsterdam and the EMGO Institute for Health and Care Research, a coauthor of the study. "An important message to teens, parents, and teachers is that temporary mood swings during early adolescence might actually be normal and aren't necessarily a reason to worry."

Researchers followed 474 middle- to high-income Dutch adolescents from ages 13 to 18. Forty percent of these adolescents were at high risk for externalizing behaviors (e.g., aggressive or delinquent behavior) at age 12. Using Internet diaries, the teens rated their daily moods in terms of happiness, anger, sadness, and anxiety during three weeks of the school year for five years (that is, a total of 15 weeks spread over five years). Using these daily assessments, the researchers calculated fluctuations in day-to-day mood and then analyzed whether these showed any developmental changes across the five-year period.

The researchers posited that teens' moods could become more stable because events that are new in early adolescence (such as first romances, which can be exciting, and conflicts with parents about leisure time, which can be frustrating) happen less frequently as teens grow older. And it's likely that adolescents figure out over time how to deal more effectively with changes in their moods.

Anxiety was the only mood that didn't fit in with this overall pattern. The variability in teens' anxious moods waxed and waned, with an initial increase, then a decrease, followed by an increase again toward the end of adolescence. This trend could be explained by the transition toward adulthood, the researchers suggest, which might induce more anxiety swings in late adolescence due to teens' increasing responsibilities (such as leaving school, going on to higher education, or getting a job).

"In general, heightened mood variability will eventually pass," notes Dominique F. Maciejewski, a Ph.D. student at VU University Amsterdam and the EMGO Institute for Health and Care Research, and the study's first author. "By demonstrating that most teens get less moody across adolescence, our study provides a solid basis for identifying adolescents who develop in a deviant way. In particular, teens who continue to be extremely moody or who get even moodier across adolescence may need to be monitored more closely since earlier studies have shown that extreme mood swings are related to more emotional, behavioral, and interpersonal problems."