It's been a cool, humid summer, and everything smells musty.

A wet towel sat at the bottom of the laundry basket. A deep green, so I cannot bleach. Though I washed it, it still smells musty.

I use baking soda and a drop of vinegar on a hot wash to freshen up the towels that we use for beach swimming and surfing.

I use Smelly Washer religiously to keep my washer and especially things like towels from smelling bad. I really works, although I hate spending the money on it. We've had this problem ever since we got our new front loading washing machine. It's a known issue.
S

borax and washing soda will help. Put the white vinegar in as the fabric softener.

I will try Smelly Washer.

I have used vinegar in the rinse.

I will try the soda and borax.

Think I will try oxy clean. (So funny. I could not think "oxy clean." I could only remember " oxy contin. Then, it was "oxycodone. " For Heaven's sake!)

One thing that REALLY helps is to not use fabric softener on towels. Fabric softener makes it harder for the towels to dry. It really seems to help prevent this problem.

One thing you can try is adding hydrogen peroxide to the wash. Clorox 2 color safe bleach is essentially diluted peroxide with some thickeners. 1 cup of peroxide to 3 cups water is the basic recipe for DIY clorox 2 color safe bleach. It really works and I have used it for 25 yrs now. With a dark towel, I would add the diluted peroxide to the water before I put in the towel, or else I would use the bleach dispenser if the washer has one.

For really stubborn loads, you can add 1/2 cup or so of ammonia,fantastik or another degreasing cleaner. It is really helpful at getting rid of stains and musty smells.
Last edited: Sep 11, 2014

A SIMPLE FIX FOR SMELLY TOWELS 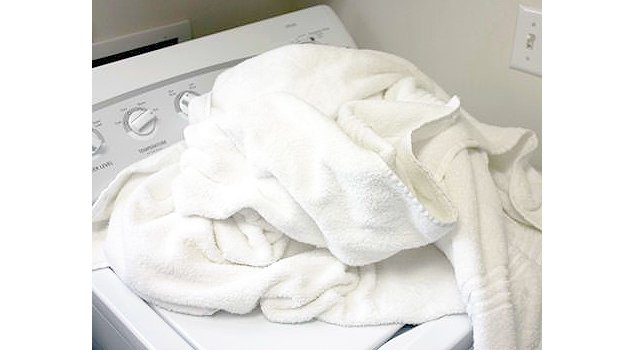 WELCOME to “Save My Sanity Saturday” at One Good Thing By Jillee….where I attempt to avoid having a nervous breakdown by actually giving myself a day off from blogging once a week!

So pull up a chair and sit back and enjoy an “oldie but goodie” from the One Good Thing By Jillee archives.

Lately I’ve been receiving a lot of emails asking about what can be done about “smelly towels.” Since I know when one person asks a question on the website or on Facebook it usually means a lot MORE are wondering the same thing….I figured it was high time I addressed it. For heaven’s sake…we can’t have people suffering needlessly from “Smelly Towel Syndrome” when there is such an EASY FIX!

To be honest, I have never had much of a problem with smelly towels because where we live is SO DRY that towels don’t really have a chance to get moldy or mildewy.

Good thing! My boys are notorious for leaving their wet towels in a puddle on the floor, in the sink, in the bathtub, everywhere BUT the hamper! And wet towels = mildew…and mildew = smelly! (That unpleasant odor is actually the smell of bacteria breeding. GROSS!)


But I HAVE noticed that sometimes my towels aren’t as absorbent as they used to be, and what I have discovered after looking into this phenomena is that both problems stem fromthe same source. Detergent and Fabric Softener Build-up!

Over time, your bath towels will build up detergent and fabric softener residue. This not only attracts SMELLY mildew, it can essentially “waterproof” your towels. If water can’t get into the fabric to clean it, the towel won’t BE or SMELL clean.

The GOOD news is that there is a very simple solution for getting rid of the build-up (and thus the SMELL)!

Put offending towels in washing machine and fill with HOT water! You might want to turn up your hot water heater temporarily for this, or I usually just boil some water on the stove and add it to the load. 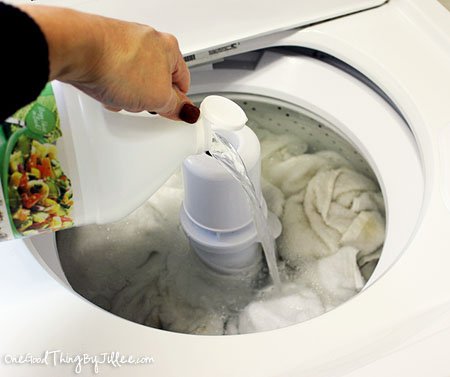 Add one cup of vinegar to the load and run through an entire wash cycle. 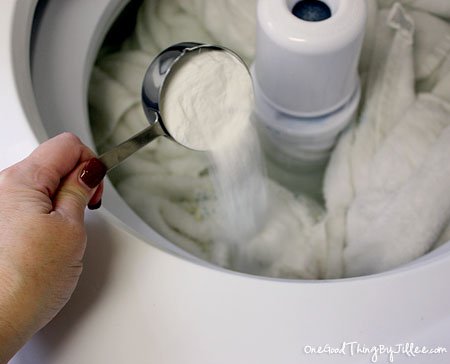 Leave towels in the washer and refill again with HOT water, this time adding 1/2 cup of baking soda. Run through another entire cycle. 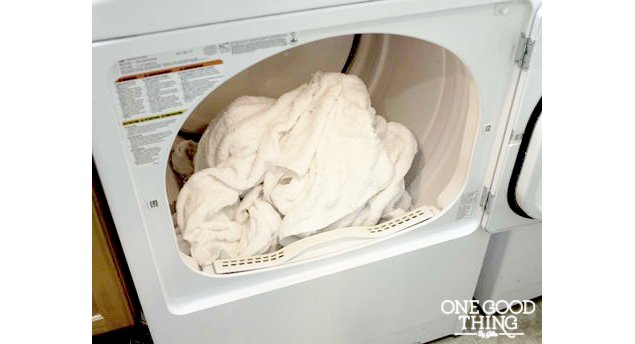 Now dry towels THOROUGHLY in the dryer or outside on the clothesline.

This combination should take care of the problem 9 times out of 10. If you are still experiencing “smelliness”…try repeating the same process above until it is gone. 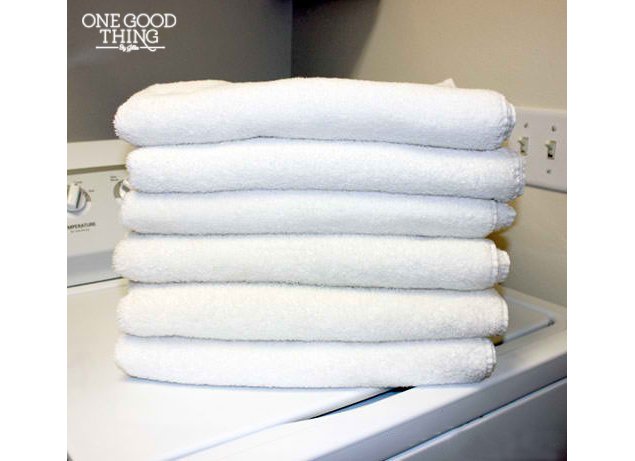 I am not recommending this method for EVERY TIME you wash your towels…only when you start to notice that “funky” smell or the towels don’t seem to be absorbing the way they should.

Tips for KEEPING your towels CLEAN and FRESH-SMELLING:

HOW TO CLEAN YOUR {FRONT LOADER} WASHING MACHINE! 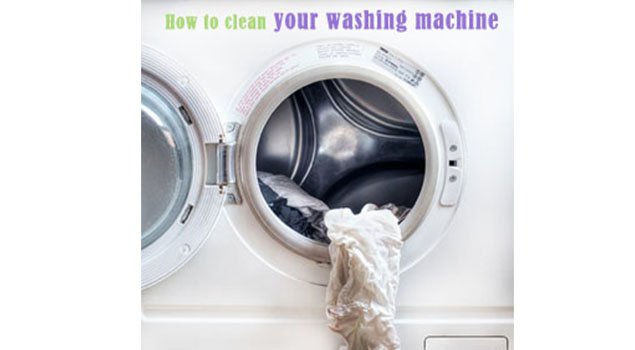 This post is brought to you by Amazon where you can get deals on household cleaners!

You had to know THIS was coming.

Earlier this month I shared important information from a Mom/firefighter about how to give your dryer a tune-up, then last week I posted about cleaning your dishwasher.

Well, it’s a new week and today…by special request….I’m going to tell you how to clean your washing machine…specifically your high efficiency washing machine.

(Don’t worry you “LOW efficiency” washing machine owners — which includes yours truly — I will get to you soon.)

The reason I’m focusing on the HE washers today is because I had lunch with my niece Ashley last week and she was complaining about “smelly clothes” coming out of her HE washer. To be honest, I didn’t know much about HE washers except that they use less water and you usually wash with cold water, which required using a certain kind of low-sudsing detergent.

Well, after tonight, I feel like I could write a novel on the HE washer. I have read dozens of online articles and I think I have a pretty good idea what Ashley’s problem is. Apparently it’s a VERY common one.

Since the HE washers use less water and energy (less HOT water)…detergent residue, dirt, mildew and minerals can build up inside the machine. This results in odors and laundry coming out less than clean.

There are some things you need to do each time you do a load of wash AND…you REALLYneed to give your HE washer a good cleaning once a month! Fortunately, the machine will do most of the work for you!

Follow these steps and your HE washer should be in tip-top shape once again and the stinky smell gone. Just remember…you need to do it REGULARLY! (once a month at least).

To keep the “smellies” from coming back…do the following EACH time you do a load of clothes:

1. Leave the door open after washing and always take items out of the washer when not in use.
2. Wipe down the rubber seal and drum.
3. Take the soap/softener drawer out to dry.

These simple steps should keep your HE washer running efficiently AND clothes smelling fresh! (the best of both worlds!)

So much work and effort and water and energy going into something that is supposed to keep our stuff clean. I never had this trouble with my top-loader. So strange. We are in a drought here in CA and have flex alerts for power, too, at times, and having to do this makes my shake my head. I have to go online and buy the Smelly Washer (four bottles at at time for $40) and of all they things I've tried, it works the best with the least effort. I add a capful to every load of towels and dishtowels every time and it keeps the smell away. And I do the bleach in washer thing every 6 weeks and never close the door unless it's in use.
4

I noticed this with my front load too. What worked for me was switching to a HE powder detergent. I use Oxydol which might be a local brand but I have used tide powder for front load also. I also use white vinegar in the fabric softener container. I haven't had a smelly towel since and it's been about 2 years now. I miss my old top loader though : )

I put the washer on clean cycle with two cups of bleach.

SUDSY WATER APPEARED IN THE DRUM.

I will be cleaning today with vinegar.

I will change laundry detergent to Oxydol powder for HE, and begin using vinegar for fabric softener.

You are all amazing.

Thank you so much.

If we should ever all come together somewhere?

No one will be able to say "EW. Musty smell. MUST BE SCENT OF CEDAR AND WE SHOULD MAKE HER CHANGE HER NAME."

Cedar....I can tell you how to make the easiest laundry detergent on earth and you will only have to make one batch a year most likely for you and husband. You only use a tbsp and it barely suds at all so its good for HE machines. In fact you can make liquid or dry. And it will cost you pennies compared to what they want to charge for bottles of that HE stuff. I made 4 gallons - roughly- for less than ten dollars and I still have leftover ingredients.

So...I read eagerly along, waiting for the part where Janet tells me how to make laundry detergent...Janet, you forgot to tell me how to do it!

LOL....which do you want liquid or powder? Oh well I will give you both. Now I will warn you my method is a bit more entailed that some you will find online because Tony has lots of dirty clothes and I tend to get food stains on my clothes. For some reason I miss my mouth quite a bit...lol. Also I make this to give to Cory and Billy and we all know kids get messy so we need some sort of enzyme cleaner in the detergent to help get rid of those "what on earth is that!" stains.

This sounds like it would cost a lot but the Fels Naptha is $1, the borax and washing soda are about $3 a piece and you are only using about a fourth of each box.
The dollar store oxyclean is about $2. The Biz is like $5 but you only use half so its $2.50 and the liquid laundry detergent at the dollar store is only a buck. Total is about $8 to $9 depending where you live. Everything can be found at Walmart or the dollar store.

Now you grate the Fels Naptha soap and put it on the stove in hot water over medium-high heat. Let it all melt in. Stir. Now stir in the borax, washing soda and oxyclean...let all that incorporate into the water. You probably need about 8 cups of water to get this to all absorb.

Once it is absorbed, pour into a 5 gallon pail. (Get one at the bakery) Add the Biz and liquid laundry detergent. Stir. Add about 3 to 4 gallons of water and stir it all together.

If you use 3 gallons it will be more concentrated. Use about two tablespoons per wash load..large wash load. If its a small load...only one.

Now for dry its almost the same except you use 3 bars of fels naptha grated, the entire boxes of borax and washing powder, 3 containers of dollar store oxyclean, half a box of Dry Biz enzyme cleaner and the one small box of dry laundry detergent. You put all that in a large trash bag to mix it all around easier and then store in a 5 gallon pail. Use one tblsp of soap per load. If using cold water, just mix it in a little water before you put it in the washer.
Top