So grateful for this forum!!!

Staff member
For so many years my life was consumed with worrying about my son, living in fear of what he would do next. I was on auto pilot as I went through my days of going to work, grocery shopping, cooking, cleaning, doing all the “normal” things.

When I went to work and people would ask me “how are you today” I would put on my plastic fake smile and say “I’m good thanks, how are you”. I was a pro at hiding all the chaos that was surrounding my life. The only one at work who knew was my boss. I had to tell her because I would get so many phone calls from the school wanting to know why my son was not in attendance (well gee, isn’t it obvious that he’s ditching), or the calls from the police that they had picked my son up (oh goody, now what has he done or they picked him up again after I reported him as a runaway), or all the times I would have to take off for his court dates.

Work was actually a good distraction, it gave me a chance to force my mind to concentrate on something else, unless of course I got one of those dreaded phone calls.

As I look back over all I endured I am amazed at the strength I possessed that I didn’t know I had. There were so many days I was sure I was going to lose my mind or at the least have a complete nervous breakdown. It became so routine when I was driving home from work, about 2 blocks from my house I would get a sick knot feeling in my stomach. I never knew what I would be walking into. Would my house be in the nice order I left it, or would my son have gone through and ransacked it. Some of what we dealt with over the years; he would break into the house after running away via cutting screens and breaking windows then proceed to ransack the house and steal money and food, holes punched and kicked into our walls, hacked my kitchen counters with a butcher knife, would sneak into our bedroom while we were sleeping and steal money out of husbands wallet, took a hammer to our bedroom door beating a foot wide hole in it after we put a lock on it, setting the field behind his school on fire, ditching school on a regular basis, smoking pot, drinking, screaming at us, calling us some very ugly things, I’m sure I’m leaving something out!

Through all of this we did everything we could to get him and our family help. We went through several counselors but nothing was helping. It got to the point that the courts ordered him out of our home into a group home for our safety. Before my son was 18 he was in 3 different group homes all of which he ran away from. This earned him 9 months in a juvenile detention center that was a 3 hour drive from our home. It was at that point that I started feeling some of the tension leave me. Knowing that he was locked up afforded me a chance to catch my breath and regain my bearings. I started to detach from him but it would be several more years before I was able to completely detach. When he was released from the juvenile detention center he was 18 and was to live in a halfway house and get a job. He managed about 3 months then he ran from the halfway house. I think that was the fourth ankle monitor that he cut off. He went on to earn more time in jail, the longest was 2 years.

After all he put us through we were still willing to help him. As his parents isn’t that what we were supposed to do?

I did finally detach from my son completely but it took quite a few years. The final straw for me was when he abandoned his beautiful wife and two children. His wife knew his past and was willing to take a chance on him. I really thought he was changing but he wasn’t, he was using his best manipulation skills, convincing all of us that he had changed. He knew that we would keep helping him if we saw he was putting forth the effort but he could only keep up the “lie” for so long.

For so many years I suffered in silence, not having anyone other than my husband to share with. I am not naïve, I knew I was not the only one who had a Difficult Child to deal with but there is something about being able to share with others that really know what it is to go through this kind of hell. To have the affirmation that I am not a horrible person for wanting nothing to do with my one and only child.

I found this site after yet another episode with my son. I had gone a little over year not hearing from my son then one day early last year I got a letter from him. He was in jail again. I wrote back to him but I knew to be very careful in how I dealt with him. Once he was released I heard nothing for months then one day last fall he reached out again wanting copies of his birth cert. so he could get an ID. I was so angry at his request as I had given him numerous copies over the years and did not want to help him, he was 32 at the time. My husband convinced me that we should help him so he could get an ID. It was that request that initiated my searching that led me to Conduct Disorders.

What a blessing it has been to be part of this wonderful forum. To be able to share with others and to be there for others. A place we can pool our experiences and our wisdom to help others who are just starting their dark journey through Difficult Childville. A place where we can come for comfort, support, a kind word or a ((HUG)).

I did survive all the chaos without losing my mind or having a nervous breakdown. I successfully detached from my son and went on to take my life back. I have a very good life and do not take it for granted. I know that there may be days in the future where my son will reach out to me again with all his chaos attached and I take comfort in knowing I have this forum to turn to for support.

I thank you all for how you share so openly and honestly. 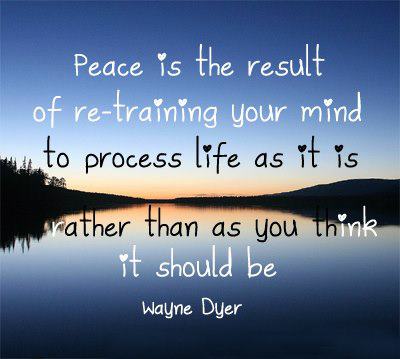 The forum is a safe place to vent and not be judged by the other posers, even when it isn't pretty.

I love the Wayne Dyer quote too:

"Peace is the result
of re-training your mind
To process life as it is,
Rather than as you think
It should be."

Gratitude. I love it.

Tanya M -- You're a gem and I thoroughly enjoy you, your heart, your words and your wisdom. You're an inspiration!
I

Gosh Tanya again thank you! Your words resonate so loud and clear! "To have the affirmation that I am not a horrible person for wanting nothing to do with my one and only child". My family think I have turned my back on her. It was the hardest thing I have ever done in my life, it took all the love in my heart and courage to finally let go of my end of the tug-a-war rope. This forum allows healing and I know that will take a lot of time. I don't allow myself to think of her, there is too much grief still in my heart.

one day at a time

What a journey it is, Tanya! I'm so glad you are here, too, and each one of you. We are all at different points in our journey, but we are all still on our journey and we will be for the rest of our lives.

There is peace and hope and serenity and happiness and joy and all good things on the "other side."

We are not alone. And we can change. And when we do, life is so much better. So. Much. Better.
Top