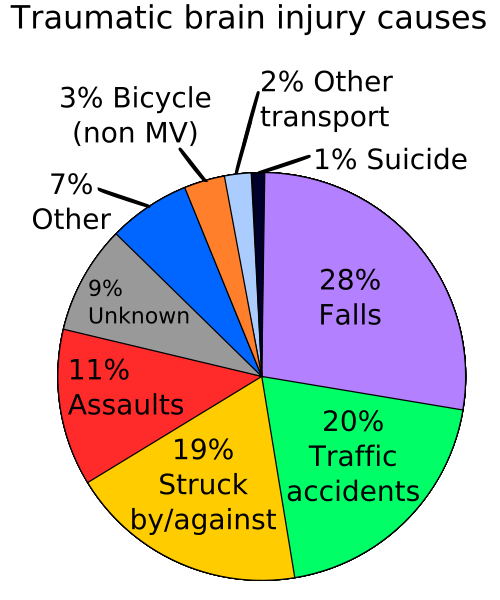 (Image Credit: Delldot via wikimedia, cc 3.0) ​
Teens who reported a traumatic brain injury in the past year were seven times more likely to have consumed at least five energy drinks in the past week than those without a history of Traumatic Brain Injury (TBI), according to a study published in PLOS ONE.

"We've found a link between increased brain injuries and the consumption of energy drinks or energy drinks mixed with alcohol," said Dr. Michael Cusimano, a neurosurgeon at St. Michael's Hospital. "This is significant because energy drinks have previously been associated with general injuries, but not specifically with Traumatic Brain Injury (TBI)."

Dr. Cusimano said energy drink consumption could interfere with recovery efforts for teens who have sustained a Traumatic Brain Injury (TBI). "Energy drinks, such a Red Bull and Rockstar, contain high levels of caffeine and change the chemical state of the body, which can prevent people from getting back on track after a Traumatic Brain Injury (TBI)," said Dr. Cusimano. "Brain injuries among adolescents are particularly concerning because their brains are still developing."

At a time when energy drink consumption is rising among teens in Canada and the United States, the study also suggests that the caffeinated drinks are particularly linked with those who play sports.

Data for the study was collected by the Centre for Addiction and Mental Health's 2013 Ontario Student Drug Use and Health Survey. Approximately 10,000 students ages 11 to 20 participated in the self-administered, in-classroom survey. Traumatic Brain Injury (TBI) was defined as an injury resulting in the loss of consciousness for at least five minutes, or being hospitalized for at least one night.

"It is particularly concerning to see that teens who report a recent Traumatic Brain Injury (TBI) are also twice as likely to report consuming energy drinks mixed with alcohol," said Dr. Robert Mann, senior scientist at the Centre for Addiction and Mental Health in Toronto and director of the OSDUHS. "While we cannot say this link is causal, it's a behaviour that could cause further injury and so we should be looking at this relationship closely in future research."

According to the new study, a better understanding of the link between Traumatic Brain Injury (TBI) and energy drinks could help medical professionals, parents, teachers and coaches understand how to better prevent, diagnose and treat brain injuries.

Wow! I have seen my son's friends drink these like I drink sweet tea!
Top