Depressed children respond differently to rewards than other kids 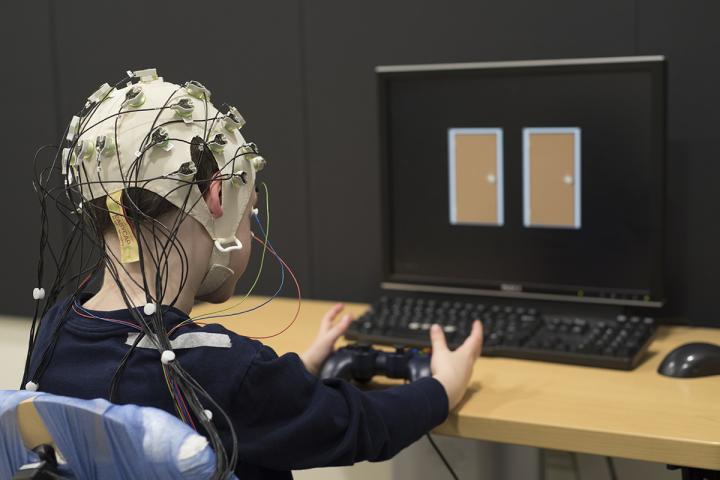 For many children, December often is linked to presents and excitement, but when a young child doesn't seem all that enthused about getting gifts, it could be a sign that something is wrong. Measuring brain waves, researchers at Washington University School of Medicine in St. Louis have found that clinically depressed children don't respond to rewards the same way as other children do.

Previous research from the same group of scientists found that a reduced ability to experience joy is a key sign of clinical depression in young children. The findings in the new study could help explain the biological underpinnings of the earlier discovery.

"These findings may show us how the brain processes emotions in young children with depression," said senior investigator Joan L. Luby, MD, director of Washington University's Early Emotional Development Program. "The pleasure we derive from rewards -- such as toys and gifts -- motivates us to succeed and seek more rewards. Dampening the process early in development is a serious concern because it may carry over to how a person will approach rewarding tasks later in life."

The new findings are published in the December 2016 issue of the Journal of the American Academy of Child & Adolescent Psychiatry.

"A blunted response to reward frequently is seen in the brains of depressed adults and adolescents," said first author Andrew C. Belden, PhD, an assistant professor of child psychiatry. "In this study, we were interested in learning whether preschoolers also had that blunted response to reward, and in fact, the brains of children as young as 4 showed very similar responses. That's consistent with other findings in that many neurobehavioral aspects of depression remain consistent throughout the lifespan."

The research, involving 84 children, was conducted as part of a larger study of clinical depression in children ages 3 to 7. The principal investigators of that larger study, which includes therapy and functional brain scanning, are Luby and Deanna M. Barch, PhD, chair of Washington University's Department of Psychological & Brain Sciences in Arts & Sciences and the Gregory B. Couch Professor of Psychiatry at the School of Medicine.

The children wore a device that resembles a shower cap but is hooked to wires that measure electrical activity in the brain using an electroencephalogram machine (EEG). Then, the children played a computer game that involved choosing between two doors shown on the screen. Choosing one door won them points, but choosing the other resulted in a loss of points.

Researchers have tested this idea in adults and teens by allowing them to win cash. In this study, however, young children who picked the correct door enough times won a toy that they were able to pick from a basket of figures, balls and plush items they had been shown before the computer session began.

"The EEG results showed that their brains did not react as robustly from the pleasurable event of choosing the correct door on the screen," Belden said. "It was not that their brains somehow overreacted to making the wrong choice. The brains of both depressed and nondepressed children reacted the same way to making the wrong choice. The differences we observed were specific to the reward response."

Luby and Belden next plan to see whether the blunted response to reward changes after treatment.

"It may or may not normalize," said Luby, the Samuel and Mae S. Ludwig Professor of Child Psychiatry. "But we suspect the reward response will improve."

Luby and Belden said that when a very young child doesn't seem to be excited by rewards, such as toys and gifts, it may be a sign that the child is depressed or prone to depression. If the condition persists, they suggest parents talk to a pediatrician.

"There are clear risk factors," Luby explained. "Decreased ability to enjoy activities and play is a key sign. Kids who feel excessively guilty about wrongdoing and those who experience changes in sleep and appetite also may be at risk. If they're persistently sad, irritable or less motivated, those are markers that may indicate depression, even in kids as young as 3 or 4, and we would recommend that parents get them evaluated."

Journal: Journal of American Academy of Child and Adolescent Psychiatry