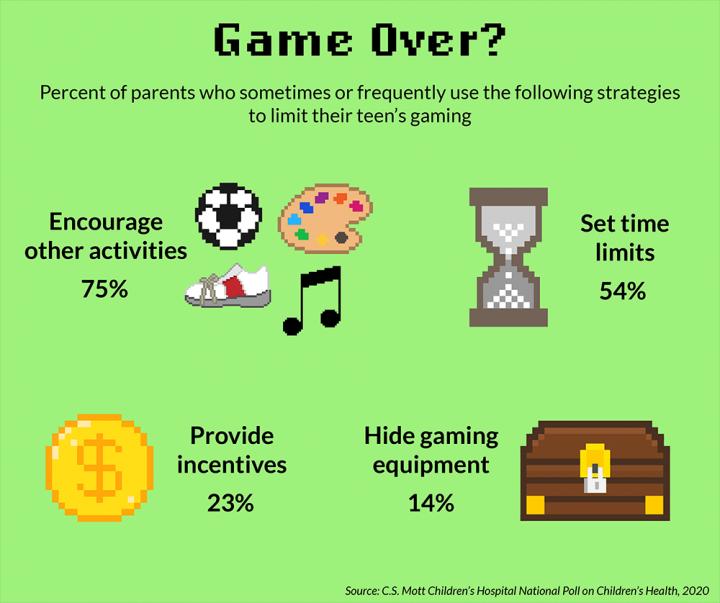 Eighty-six percent of parents agree that teens spend too much time gaming, but many may be mistaken about the extent of their own child's video game habits, a new national poll suggests.

Overall, parents surveyed say gaming often gets in the way of other aspects of their teen's life, such as family activities and interactions (46%), sleep (44%), homework (34%), friendship with non-gaming peers (33%) and extracurricular activities (31%).

"Although many parents believe video games can be good for teens, they also report a number of negative impacts of prolonged gaming," says Mott Poll co-director and Mott pediatrician Gary Freed, MD, MPH.

"Parents should take a close look at their teen's gaming behavior and set reasonable limits to reduce harmful impacts on sleep, family and peer relationships and school performance."

"Many parents of frequent gamers have a misconception that the amount of time their teenager spends playing video games is in line with their peers," Freed says.

While 71% of parents believe video games may have a positive impact on their teen, some (44%) try to restrict video game content. Parents of teens ages 13-15 (compared to those with older teens) are more likely to use rating systems to try to make sure games are appropriate (43% versus 18%), encourage their teen to play with friends in person rather than online and to ban gaming in their teen's bedroom.

Freed notes that while gaming may be a fun activity in moderation, some teens -such as those with attention issues -- are especially susceptible to the constant positive feedback and the stimulus of video games. This may lead to prolonged play that is disruptive to other elements of a teen's life.

He recommends parents show interest by playing video games with their kids while also communicating healthy limits and ensuring that they have strong privacy settings. In some situations, he notes, games can help parents connect with older kids and may occasionally help open the door to other conversations and interactions.

But parents should also help teens understand that limits and rules around gaming are tied to safety, health, school and relationships.

"Parents can play an important role by setting clear rules about appropriate content and how much time is too much time spent on video games," Freed says.

"While many parents see benefits in gaming, the activity should not be at the expense of face-to-face time with family, friends, and teachers who play a pivotal role in promoting a teen's learning and healthy development."