New strategy could uncover genes at the root of psychiatric illnesses

Staff member
Understanding the basis of psychiatric disorders has been extremely challenging because there are many genetic variants that may increase risk but are insufficient to cause disease. Now investigators describe a strategy that may help reveal how such "subthreshold" genetic risks interact with other risk factors or environmental exposures to affect the development of the nervous system. Their research pinpoints a genetic variant that may predispose individuals to schizophrenia. 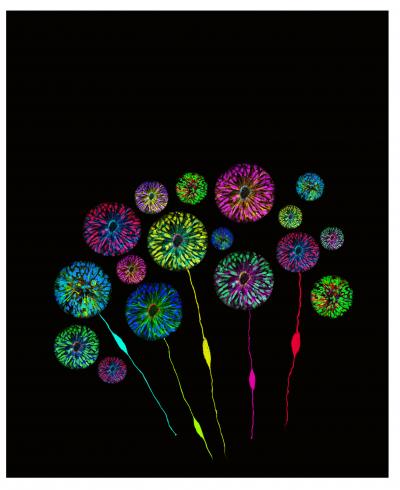 Image was created using images of neural rosettes derived from human iPSCs with and without a 15q11.2 microdeletion (round circles) and images of radial glial cells in the developing mouse cortex (thin filaments). (Credit: Ki-Jun Yoon)​
The work takes advantage of a recently developed technology that allows skin cells from patients to be reprogrammed into induced pluripotent stem cells (iPSCs) that can then generate any cell type in the body. Through this technology, scientists obtained stem cells from individuals with a genetic abnormality that confers increased susceptibility to schizophrenia, and they observed deficits during nerve development that could be traced to a specific gene called CYFIP1, which helps maintain a nerve cell's structure. The team then blocked the expression of this gene in developing mouse embryos and noticed defects in the formation of the cerebral cortex, a brain region that plays an important role in consciousness.

Next, the scientists turned to human genetic studies to see how CYFIP might interact with other factors. They found that mutations in two genes within a cellular pathway linked to CYFIP1 led to a significantly increased risk of schizophrenia. The findings support the theory that multiple factors within the same pathway may interact to affect one's risk for psychiatric disorders.

"We were able to use a set of cutting-edge tools to gain insight into a critical cellular process for normal brain development, the dysregulation of which may be a manifestation of a genetic predisposition for schizophrenia," says senior author Dr. Guo-li Ming, of Johns Hopkins University School of Medicine. The researchers' strategy—generating disease-specific nerve cells, identifying a causative gene for developmental defects, validating the gene-specific defect in animal models, and then investigating interactions with other genes both in animal models and in humans—represents a promising new approach for understanding the mechanisms underlying some of the most intractable psychiatric illnesses.

The work also highlights the promise of iPSC technology as a discovery tool in understanding and treating human disorders. "Despite an enormous amount of time and resources devoted to producing solid, reproducible results in animal models, far too often, results from preclinical trials deviate from our expectations," says co-author Dr. Hongjun Song. "The lack of access to disease-relevant human cell types has been a missing link in our current drug discovery process, which has now been resolved through advances in cellular reprogramming."

Too much fatty food could set children up for mental problems