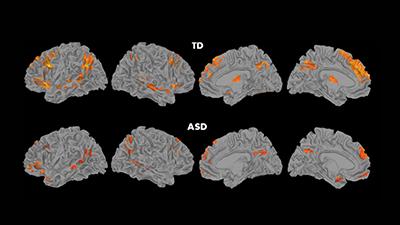 (Image credit: Carnegie Mellon University)​
The holidays can be difficult for children with autism spectrum disorder (Autism Spectrum Disorders (ASD)), particularly because of new or different social situations. One reason scientists believe Autism Spectrum Disorders (ASD) causes impairment in social interactions is due to an inability to effectively infer other's thoughts and feelings through "theory of mind," or ToM -- the ability to understand the mental states of others and oneself.

An innovative brain imaging study has uncovered new evidence explaining why ToM deficiencies are present in Autism Spectrum Disorders (ASD) children. Published in Molecular Autism, the research reveals disruptions in the brain's circuitry involved in ToM at multiple levels compared to typical brain functioning. The findings provide valuable insight into understanding the functional makeup of a vital neural network that is critical for characterizing the social symptoms in individuals with Autism Spectrum Disorders (ASD).

"Reduced brain activity in ToM-related brain regions and reduced connectivity among these regions in children with autism suggest how deficits in the neurobiological mechanisms can lead to difficulties in cognitive and behavioral functioning, such as theory of mind," said Marcel Just, the D.O. Hebb University Professor of Psychology at Carnegie Mellon University. "Weaker coordination and communication among core brain areas during social thinking tasks in autism provides evidence for how different brain areas in autism struggle to work together as a team."

The study used an approach first developed by Fulvia Castelli and her colleagues in the U.K. that created animation videos depicting two geometric shapes moving around the screen. The shapes, such as a large red triangle and a small blue triangle, moved in ways that could be seen as an interaction between them, such as coaxing or dancing. The team demonstrated that "seeing" the interactions was in the mind of the beholder, or to be more specific, in the ToM circuitry of the viewer's brain. Without ToM, it tended to look like geometric shapes moving around.

To investigate the neural mechanisms involved with ToM, the Carnegie Mellon-led research team asked 13 high-functioning children with Autism Spectrum Disorders (ASD) between the ages of 10 and 16 and 13 similarly aged children without Autism Spectrum Disorders (ASD) to watch these short animated films. The children were asked to identify the thoughts and feelings, or mental states, of those triangles while having their brains scanned by an fMRI scanner.

The children with Autism Spectrum Disorders (ASD) showed significantly reduced activation compared to the neurotypical children in the brain regions considered to be part of the ToM network, such as the medial frontal cortex and temporo-parietal junction. Furthermore, the synchronization between such pairs of regions was lower in the autism group.

The results support Just's 2004 influential "Frontal-Posterior Underconnectivity Theory of Autism," which first discovered this lower synchronization. In later studies, Just has demonstrated how this theory accounted for many brain imaging and behavioral findings in tasks that required a substantial role for the frontal cortex.

"One reason this finding is so interesting is that the 'actors' in the films have no faces, facial expressions or body posture on which to base a judgment of an emotion or attitude," said Rajesh Kana, associate professor of psychology at the University of Alabama at Birmingham. "The neurotypical children managed to identify a social interaction without social cues, such as interpreting the large triangle nudging the smaller one as a parent's attempt to encourage a child, but the Autism Spectrum Disorders (ASD) children were unable to make the connection."

To date, most research investigating the connectivity among core brain regions in Autism Spectrum Disorders (ASD) has focused on adults, limiting knowledge about how the disorder affects younger individuals.

"By studying children, we were able to show that it is possible to characterize the altered brain circuitry earlier in development, which could lead to designing earlier effective intervention programs that could train children to infer the intentions and thoughts that underlie physical interactions between people," Just said. "For example, children could be trained to distinguish between a helpful nudge and a hostile poke."