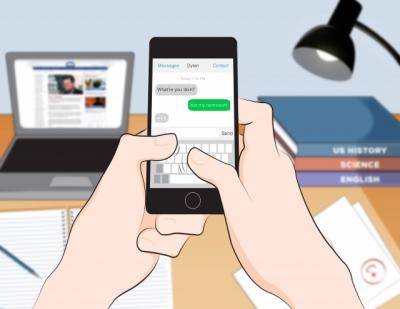 Don't get mad the next time you catch your teenager texting when he promised to be studying.

He simply may not be able to resist.

A University of Iowa study found teenagers are far more sensitive than adults to the immediate effect or reward of their behaviors. The findings may help explain, for example, why the initial rush of texting may be more enticing for adolescents than the long-term payoff of studying.

"The rewards have a strong, perceptional draw and are more enticing to the teenager," says Jatin Vaidya, a professor of psychiatry at the UI and corresponding author of the study, which appeared online this week in the journal Psychological Science. "Even when a behavior is no longer in a teenager's best interest to continue, they will because the effect of the reward is still there and lasts much longer in adolescents than in adults."

For parents, that means limiting distractions so teenagers can make better choices. Take the homework and social media dilemma: At 9 p.m., shut off everything except a computer that has no access to Facebook or Twitter, the researchers advise.

"I'm not saying they shouldn't be allowed access to technology," Vaidya says. "But they need help in regulating their attention so they can develop those impulse-control skills."

In their study, "Value-Driven Attentional Capture in Adolescence," Vaidya and co-authors Shaun Vecera, a professor of psychology, and Zachary Roper, a graduate student in psychology, note researchers generally believe teenagers are impulsive, make bad decisions, and engage in risky behavior because the frontal lobes of their brains are not fully developed.

But the UI researchers wondered whether something more fundamental was going on with adolescents to trigger behaviors independent of higher-level reasoning.

"We wanted to try to understand the brain's reward system and how it changes from childhood to adulthood," says Vaidya, who adds the reward trait in the human brain is much more primitive than decision-making. "We've been trying to understand the reward process in adolescence and whether there is more to adolescent behavior than an under-developed frontal lobe," he adds.

For their study, the researchers recruited 40 adolescents, ages 13 and 16, and 40 adults, ages 20 and 35. First, participants were asked to find a red or green ring hidden within an array of rings on a computer screen.

Once identified, they reported whether the white line inside the ring was vertical or horizontal. If they were right, they received a reward between 2 and 10 cents, depending on the color.

For some participants, the red ring paid the highest reward; for others, it was the green. None was told which color would pay the most.

After 240 trials, the participants were asked whether they noticed anything about the colors. Most made no association between a color and reward, which researchers say proves the ring exercise didn't involve high-level, decision-making.

In the next stage, participants showed they had developed an intuitive association when they were asked to find a diamond-shaped target. This time, the red and green rings were used as decoys.

Even after 240 trials, the adolescents were still more apt to pick the colored rings.

Researchers say that inability to readily adjust behavior explains why, for example, a teenager may continue to make inappropriate comments in class long after friends stopped laughing.

In the future, researchers hope to delve into the psychological and neurological aspects of their results.

"Are there certain brain regions or circuits that continue to develop from adolescence to adulthood that play role in directing attention away from reward stimuli that are not task relevant?" Vaidya asks. "Also, what sort of life experiences and skill help to improve performance on this task?"