Study: Teens start misusing ADHD drugs and other stimulants earlier than you might think 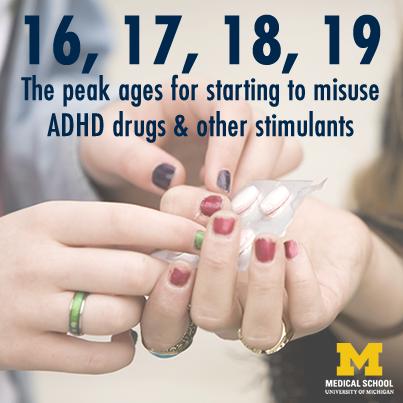 Despite stereotypes about college students resorting to black-market Ritalin to help them cram for exams, young people are actually most likely to start misusing prescription stimulant drugs in their high school years, according to new University of Michigan Medical School research.

The peak ages for starting to use these drugs without a prescription - in order to get high or for other effects - are between 16 and 19 years.

That's according to a new analysis of national data from anonymous surveys of more than 240,000 teens and young adults.

Each year between the ages of 16 and 19, just under 1 percent of teens started using stimulant medications not prescribed to them, or to achieve a certain feeling -- including drugs like Ritalin that are usually used to treat attention deficit hyperactivity disorder, as well as prescription diet drugs and medicines that contain methamphetamine.

The findings suggest that education programs should start in middle school to keep more young people from starting to use prescription stimulants for non-medical uses. Such use can bring risky side effects, including the chance of becoming dependent on an illegally obtained drug, and even hallucinations, suicide or sudden death.

"We need to have a realistic understanding of when young people are beginning to experiment with stimulants, so we can prevent them from misusing for the first time," says study author and U-M Injury Center postdoctoral fellow Elizabeth Austic, Ph.D., MSW, MSI. "To prevent someone from using for the first time is often more cost efficient and effective than trying to intervene once they have done it, whether a few times or for years."

Her analysis used data from the National Surveys on Drug Use and Health, conducted among young people aged 12 to 21 years by the federal Substance Abuse and Mental Health Services Administration between 2004 and 2012.

Austic mined the data for the number of young people who reported that they had started using prescription stimulants in the past year.

She notes that while most education and prevention programs around stimulant misuse have been aimed at the college population, her results show that respondents aged 20 and 21 had the same rate of starting stimulant use as those aged 13 and 14. If a young person is going to start using stimulants, he or she is most likely to start in the late teen years.

Surprisingly, the study shows that at age 18, the rate of starting stimulant misuse was twice as high among young women as it was in young men. Prescription diet pills were the most popular stimulant drug misused by females, while Adderall was the most popular among males. Non-Hispanic white and Native American teens also had a higher rate of prescription stimulant misuse overall than all other race and ethnicity groups.

"People have been thinking this is a college problem, but they just don't realize how prevalent it is at younger ages," explains Austic, who is part of the Postdoctoral Translational Scholars Program run by the U-M Medical School's Michigan Institute for Clinical & Health Research.

Although research has debunked the idea that taking prescription stimulants sporadically can improve grades, teens may still seek this effect based on misperceptions. Or, they may misuse stimulants for the sense of euphoria they bring if taken in certain ways or doses, or even to recover from hangovers.

The current generation of young people may perceive Ritalin and other prescription stimulants as safe because they've seen their friends and siblings take them daily under a doctor's care for ADHD.

But many carry a "black box" warning about side effects, and have very different effects on the brains of people without ADHD, and when taken with alcohol or other drugs. The combination of stimulants and alcohol can be especially dangerous because the drugs counteract the natural sedative effects of alcohol, raising the risk of risky behaviors such as violence and drunk driving.

"The earlier people begin misusing drugs of any kind, the more likely they are to develop drug dependence problems," says Austic. "The fact that the peak ages for starting to misuse prescription stimulants are between 16 and 19 should be concerning to those who understand how drug dependence works."

Based on her data, Austic is working with U-M colleagues to develop an intervention that would help young people who are being treated with stimulants for ADHD understand the dangers of sharing their medicine with others, and the risk that others might want to steal their pills to use themselves.

Other research has shown that a quarter of adolescents who have a prescription for ADHD medication share or sell it, often because they're pressured or bullied, and 7 percent have had their medicine stolen.

"Ultimately, we need to see more interventions that are school-based and doctor's office-based interventions starting in early adolescence, for both young people who have a prescription and those who don't," she says. Parents of children and teens who use ADHD medication should also be trained to understand the realities of stimulant misuse, and to monitor their child's medication supply.