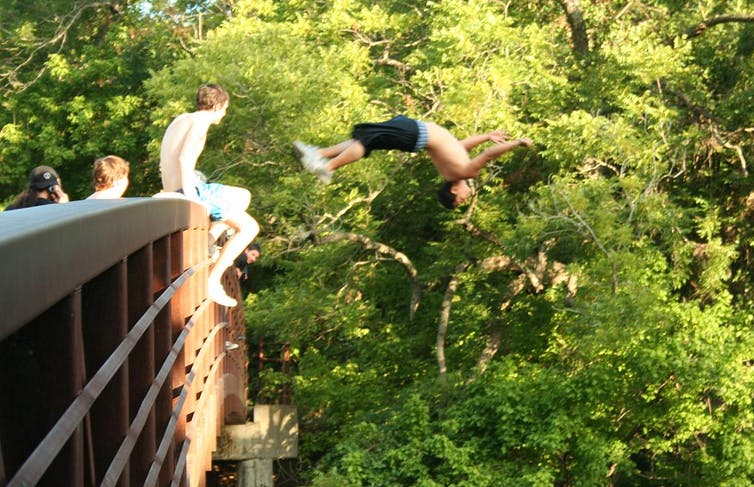 You know the conventional wisdom: Adolescents are impulsive by nature, like bombs ready to go off at the most minor trigger. Parents feel they must cross their fingers and hope no one lights the fuse that will lead to an explosion. Adults often try restricting and monitoring teens’ behavior, in an effort to protect these seemingly unthinking riskseekers. That’s the tale told in the media, anyway.

Neuroscience evidence has seemed to bolster the case that adolescents are just wired to make bad decisions. Studies suggest that brain regions associated with self-control and long-term planning, such as the prefrontal cortex, are still developing. At the same time, adolescence is a time of increased activity in a brain region associated with reward, the ventral striatum. The story goes that these out-of-control teens are both extra sensitive to rewards and unable to rein in impulses – and thus naturally risky. They just can’t control themselves because their brains are unevenly developed.

As psychologists who focus on adolescents and their developing brains, we believe that teens have gotten an unfair rap. There are important developmental reasons adolescents act the way they do. They’re driven to explore their environments and learn everything they can about their surroundings. A teenager’s job, developmentally speaking, is to try out new behaviors and roles. Doing that sometimes involves risk – but not necessarily risk for its own sake.

Teens have their own priorities
Adolescents are just as capable as adults of controlling their behaviors to achieve their goals.

In fact, adolescents are actually more accurate than adults at laboratory tasks that measure cognitive control; they do just fine at things like updating knowledge of rules when they change or maintaining numbers in working memory. Person-to-person differences in these types of abilities within age groups are larger than the effect of being an adolescent or an adult.

Adolescents even do just as well, if not better, than adults at tasks that come with potential rewards. For example, adolescents are faster and more accurate than adults at refraining from pressing a button when they know strong performance on the task comes with a reward. Teens perform better even in emotional contexts if they are rewarded for success.

In both of these scenarios, being focused on getting a reward is helpful. In fact, if the stakes are high, teens are more deliberative and show more activity in control regions of the brain than adults.

However, if researchers use incentives as a distraction, teens do worse than adults at tasks that involve cognitive control. For example, one study found adolescents were slower and less accurate at ignoring previously rewarding stimuli when they need to direct their decision-making attention elsewhere.

So teens don’t make decisions like adults. The real difference lies in what adolescents value: Gaining peer acceptance or a reward may outweigh the value adults place on delaying reward for a long-term nonsocial goal, such as financial stability.

A time of exploration and learning
Way back in human evolutionary history, when lifespans were shorter, adolescents needed to explore their world to find food and mates. While stakes are different for modern teens, exploration is still important, as they learn skills essential for adulthood. Adolescence is the time when teens master how to navigate social relationships, develop more of a sense of who they are, and figure out how to do things independently.

Learning and exploring, by definition, require teens to have experiences where the outcome is unknown in advance. A big part of that means taking some risks to explore and figure out new information.

Imagine never leaving your neighborhood because you know it’s safe. Walking to a new area might be more dangerous, but it could offer better restaurants or more part-time jobs. It might also provide more diverse social opportunities, such as team sports or exposure to additional romantic prospects.

The essence of exploration is venturing into the unknown for the chance at something better.

This plays in to the way adolescents have a greater tolerance for ambiguity than adults. Given the chance at winning a greater reward, teens are more willing to choose an option with more “risk,” or uncertainty of winning or losing, than the “safe” option where the odds of winning and losing are spelled out.

In the end, learning about the world necessarily involves risk. You don’t know for sure what you might learn until you try it. This fact is reflected in the brain’s architecture, as the same regions recruited during reward processing and risk taking are also involved in learning. In fact, the people who activated those reward regions the most during a risk-taking task in the lab also learned the fastest on the task.

Exploring the self
There is one other aspect of adolescent exploration that doesn’t fit with the standard story: It looks different from teen to teen. Most teenagers aren’t the stereotypical whirlwinds of risk taking. If adolescence is focused on learning about the world more than taking risks for their own sake, then many teens will learn without putting themselves in harm’s way. What determines the nature of teenage exploration?

Part of the task of adolescence is trying out different “selves” and discovering who you are. Adolescent exploration helps teens form their identity. This period is a time of increased autonomy, socialization and self-consciousness.

The ways teens choose to explore their world depend on how they think about themselves and their social world. For example, consider a high schooler deciding to ditch soccer practice to talk to a crush or sneak to the mall. Does the teen identify as an athlete? Is soccer an important part of her self? Do her friends compare who scored more goals?

Across adolescence, teens begin to actively question and think about their identity. Regions of the brain that help process self and social information also continue to mature during these years. When teens think about themselves and what other people think about them, these same brain regions light up.

An intriguing finding is that the same brain region that plays a role in learning and reward processing is also active when teens think about themselves. Such an overlap hints that for teens, evaluating themselves is intertwined with learning about themselves, too - and they may be intrinsically motivated to do both.

Consider what teens are trying to do
Much of the public discussion about teens surrounds why they take seemingly needless risks. A better way of thinking about adolescence might be as a sensitive period for learning about oneself and exploring the social world.

Sometimes exploration can lead to more risk taking. But those risks are taken in service of preparing for adulthood, by acquiring skills and knowledge; and not all learning involves risk.

What does this mean for parents and teachers? Some teen behavior appears irrational or distasteful to adults. Adult and teen brains face different challenges and so they value different things. Teens are still exploring the world that adults have already come to know. When judging teens, adults should consider the elevated value to adolescents of learning about themselves and their social world. Their behavior might start to seem less irrational.

Originally published at The Conversation