'A way cool way to be': Study offers new insights into children with autism 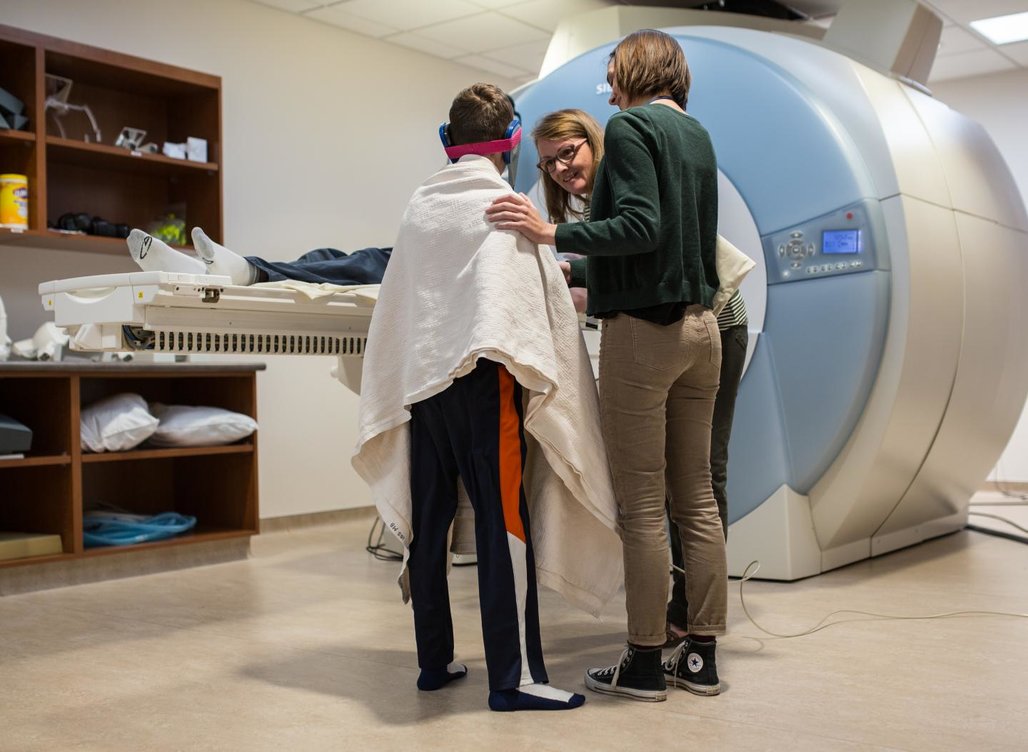 It's a challenging proposition for anyone: Lie flat on your back, helmet covering half of your face, in a tight-quartered MRI capsule that would make even the non-claustrophobe jittery. Then try not to move for 45 minutes. For children and adolescents with autism and low verbal and cognitive performance (LVCP), that proposition has been nearly impossible without sedation -- until now.

Using a range of behavioral support procedures to minimize fear and anxiety, a team of interdisciplinary researchers from Brigham Young University and the University of Utah managed to complete structural and functional MRI scans of 37 children and adolescents with autism, including 17 with less-developed language skills and an average IQ of 54.

"This is such an overlooked group of kids and adults," said Ryan Kellems, BYU assistant professor of counseling psychology and special education. Kellems also co-authored the study, just published in top academic journal Molecular Autism. "We don't know very much about their brains because people say they are challenging to study."

Other researchers have done structural MRIs of individuals with LVCP populations under sedation, but this group, spearheaded by autism pro and BYU assistant professor of school psychology Terisa Gabrielsen, wanted to find a way to watch their brains while they were awake and working. So they created a video explaining the step-by-step fMRI process children could watch at home multiple times, and they provided families with audio files that would help children prepare for the sounds they'd hear in the machine.

When children arrived for their scans, the researchers let them push buttons on the machine so they could see it move up and down. And once the scans began, added Gabrielsen, "if they were getting antsy, we reassured them. We could hold their hand. We could remind them to stop moving. We were focused on giving them more than what they might need to be successful in the scanner."

With the scans they were able to complete, the team analyzed how those from the LVCP group compared to higher performance children with autism, as well as neurotypical children.

The team found that within the LVCP group, a number of the brain's networks "just weren't working in sync as much," Gabrielsen. "And we also found decreased activity between the left and right hemispheres."

Another finding practitioners have observed clinically but haven't yet been able to observe in the brain: network connectivity was higher for the LVCP group than for the neurotypical group.

Understanding what's happening in the brain, how information is being processed and what is or isn't being attended to, South explained, will allow researchers and practitioners to ultimately help make life better for individuals with autism and their families.

"We don't want to change the brain, we want to accept folks with autism," said South, who is also an autism scholar. "This is a way cool way to be, and we just want to help you get along in your world."

Moving forward, the team would like to do follow up scans with the same children, and also get larger samples of each of the groups: "Getting younger kids, kids with even less language, all of that would be helpful and solidify the findings and tell us more," said Gabrielsen. "Thanks to the participants in this study, we know how to do it now."

Disclaimer:
This article is not intended to provide medical advice, diagnosis or treatment. Views expressed here do not necessarily reflect those of ConductDisorders or its staff.
You must log in or register to reply here.
Share:
Reddit Pinterest Tumblr WhatsApp Email Link
Top