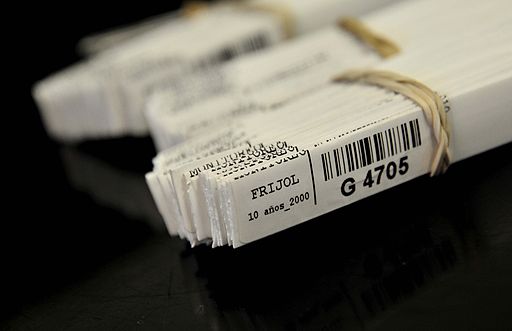 (Photo: By CIAT mrjohncummings via Wikimedia Commons)​
Study involved families that had both prodigies and people with autism

Researchers have uncovered the first evidence of a genetic link between prodigy and autism.

The scientists found that child prodigies in their sample share some of the same genetic variations with people who have autism.

These shared genetic markers occur on chromosome 1, according to the researchers from The Ohio State University and Nationwide Children's Hospital in Columbus.

The findings confirm a hypothesis made by Joanne Ruthsatz, co-author of the study and assistant professor of psychology at Ohio State's Mansfield campus.

In a previous study, Ruthsatz and a colleague had found that half of the prodigies in their sample had a family member or a first- or second-degree relative with an autism diagnosis.

"Based on my earlier work, I believed there had to be a genetic connection between prodigy and autism and this new research provides the first evidence to confirm that," Ruthsatz said.

The new study appears online in the journal Human Heredity.

While this study provides a solid basis for identifying a linkage, there is a lot more to be learned, said co-author Christopher Bartlett, a principal investigator at Nationwide Children's Hospital and associate professor of pediatrics at Ohio State.

"We haven't identified the mutations, but we found that there's something in this region of chromosome 1 that is the same with both prodigies and their family members with autism," Bartlett said.

These findings are the first step toward answering the big question, Ruthsatz said.

"We now know what connects prodigy with autism. What we want to know is what distinguishes them. We have a strong suspicion that there's a genetic component to that, as well, and that's the focus of our future work," she said.

The Human Heredity study involved five child prodigies and their families that Ruthsatz has been studying, some for many years. Each of the prodigies had received national or international recognition for a specific skill, such as math or music. All took tests to confirm their exceptional skills.

The researchers took saliva samples from the prodigies, and from between four and 14 of each prodigy's family members. Each prodigy had between one and five family members in the study who had received a diagnosis on the autism spectrum.

DNA was extracted from the saliva and the researchers sequenced the exome - the segment of DNA containing the 1 to 2 percent of genes that make proteins. (This is less expensive and complex than sequencing the entire genome.) The researchers plan to follow up with full genome sequencing, which will reveal more information about genetic mutations that the prodigies share with people with autism.

"What we found here was just an indication that there's something similar in the genetic makeup of prodigies and their family members with autism. There's a lot more that needs to be studied," Bartlett said.

In her earlier work, Ruthsatz found that while both prodigies and people with autism share better than average scores on tests that measure attention to detail, prodigies scored higher among those two groups. And prodigies really excelled when it came to working memory, with all that she studied scoring in the 99th percentile.

"We believe that there may some gene or genes for working memory that may be a key part of helping to create prodigies," Ruthsatz said.

"Prodigies seem to have some protective genes that are saving them from the deficits associated with autism and only allowing the talent you see in savants to shine through. That's what we're looking to identify."

In the meantime, the researchers caution that they haven't found any "smoking gun."

"The testing we did here wouldn't help anyone tell if he or she was going to be a prodigy or have autism," Bartlett said.

"We didn't find the exact genes or mutations involved. It is a good start, but it is just a start."