oh, it's Tuesday.
Does it matter?
Took all 3 dogs for a walk at 7.45 a.m. Drizzly and gloomy. Braveheart, the Scottish Terrier, pooped and I picked it up in a baggy. Ewwww. Worms. Of the white rice/flea egg type.
I will pick up medications at the vet today. He's on Vectra but apparently not enough.
On the way home, an ambulance siren echoed around the neighborhood for 5 or 10 min until it finally came to rest one house away. Can't figure out if it's my elderly neighbor, Millie, who has been in and out of hospital for the past 5 yrs, and each time could be the last ... or Ron, who's got Parkinson's and gets these weird attacks where he can't function. He was in a nursing/rehab facility for a month and just got out a wk ago.
And then I got home, made some tea, and got an email from Difficult Child's school. The gov't teacher forwarded the progress report--all zeros and Fs--and said he had taken away Difficult Child's phone. I emailed back to the counselor that we need to keep an eye on Difficult Child's whereabouts because his M.O. is to walk out of the bldg when he's stressed.
It's raining harder now.

I hope you are planning to do some painting today, and drink more tea, and look out of the window at the rain.

I used to read this poem to my son when he was very little:

Waiting at the Window 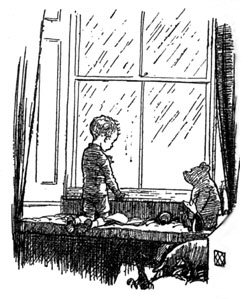 These are my two drops of rain
Waiting on the window-pane.

I am waiting here to see
Which the winning one will be.

Both of them have different names.
One is John and one is James.

All the best and all the worst
Comes from which of them is first.

James has just begun to ooze.
He's the one I want to lose.

John is waiting to begin.
He's the one I want to win.

James is going slowly on.
Something sort of sticks to John.

John is moving off at last.
James is going pretty fast.

John is rushing down the pane.
James is going slow again.

James has met a sort of smear.
John is getting very near.

Is he going fast enough?
(James has found a piece of fluff.)

John has hurried quickly by.
(James was talking to a fly.)

John is there, and John has won!
Look! I told you! Here's the sun!

I love rainy days. I feel content and at peace. I live in the wrong place.....way to many sunny days.

It's Wednesday morning here, too.

It's overcast and rainy here, too. As usual for later fall. Beats winter--overcast and snowy.

I can't wait to get to the sunny south! Going for Christmas.

I have been watching my 'pet' squirrel who lives in the back yard. He knocked a bird feeder down and has been gathering all the seeds. So adorable!

Making beans and ham for dinner tonight, so I got that in the crockpot. Got swimming lessons for 10yo in a bit, then in for the day!

Very cute poem, Nlj. Appropos.
Apple, sounds like a great dinner. I'll sneak over.
Pasa, I don't mind the rain at all. It's the stuff that happens that does it ...

Oh, and yes, I finished a painting.

How are you doing this morning, Terry?

When my D C was in public school, they made it clear that they were not going to keep tabs on kiddo ( he left school on an almost daily basis) other than report him absent and take me to truancy court. When they turn 18 they stop taking the parent to truancy court. This year they have done away with the making it a criminal offense.

Sigh.
Good idea.
So, today IS THURSDAY.
I edited with my friend, Bill from 8:30-10 and then we went for a walk. (nonfiction)
I edited with my friend, Christine, from 12:15-1:30. (Fiction)
Came up here to my office to respond to notes. Jumped out of my skin with Difficult Child walked up behind me just before Christine came over.
"I want to communicate with you," he said.
Deep breath.
"I got into it with Mr. M again today. I walked out when he called security."

So, if he just walks out of school, are there any consequences the next day?

Yes, here were are, another Thursday, and it's raining.

difficult child and I both have bad colds. Difference is, he takes off and spends time with girlfriend H, as well as ex girlfriend D and the baby. Nothing like spreading the love!
I told him that was a bad idea.
What I haven't told him is that yesterday, I emailed the school and got him excused. Not going to do it again today.
You're either home sick, or you're not.
That's been the rule since he was born.

I Turned Him In

Have a feeling of impending doom
2 3

Earth day - tomorrow - can we really do something?
2