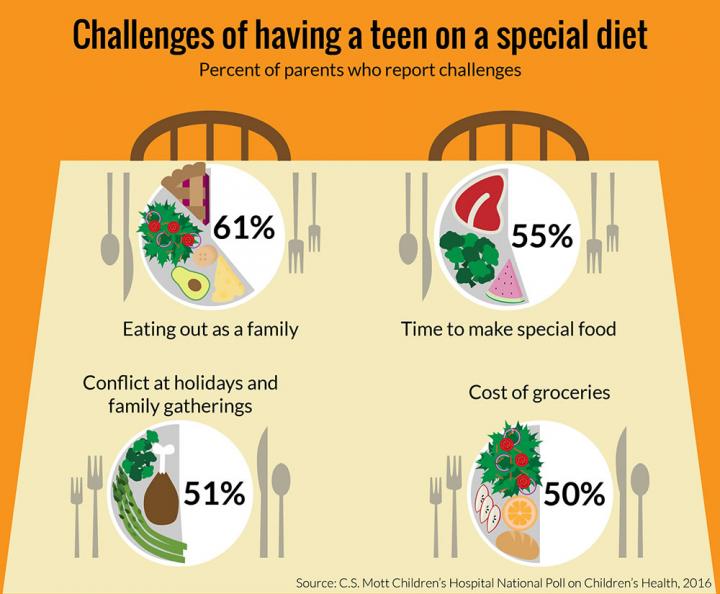 Planning a holiday meal can be hectic, and some families will be managing an extra stressor: accommodating the dietary restrictions of teens on gluten-free, vegan or other special diets.

For a variety of reasons, many teens choose diets that go beyond cutting calories and reducing portion sizes - instead, these special diets restrict entire food groups. That could mean added costs and new logistical challenges for families, suggests a new national poll.

One in six parents say their teen has tried a diet that is vegetarian (9 percent), gluten-free (6 percent), vegan (4 percent) or paleo (2 percent) at some point in the past two years, according to the C.S. Mott Children's Hospital National Poll on Children's Health at the University of Michigan.

The diet changes weren't always harmonious. Roughly half of parents in the Mott poll said the special diets caused conflicts at holiday and family gatherings.

"Teen diets that limit food options can impact the whole family," says poll co-director Sarah Clark, M.P.H. "That can lead to conflict at the holidays if the diet doesn't include the mainstays of the family's traditional meal, and the teen refuses to eat Granny's famous mac & cheese, or the turkey Aunt Emma spent all day preparing."

"Parents can work with teens to minimize any burden on family members, such as asking the teen to prepare his or her own meals, or finding diet-compliant versions of the family's favorite foods," says Clark.

Parents gave a variety of reasons for why their teen tried the special diet: 32 percent said it was health-related, while 29 percent said it was because another family member was on the same diet. Other motives included a friend's suggestion (17 percent) and the diet's environmental impact (14 percent).

More than half of parents say they did their homework when their teen started a special diet -- with nearly half suggesting that their teen began taking vitamins or supplements in tandem. Just 17 percent brought their teen to a health care provider to discuss whether the diet was healthy.

"Parents may not recognize this as a situation that would benefit from advice from a health care professional," says Clark.

About half of parents (52 percent) think the special diet had a positive impact in their teen feeling healthier, while 41 percent believe it made no difference.

On the other hand, 7 percent say the diet negatively impacted their teen's health.

"There are situations where diets that restrict certain food groups can result in teens not getting enough protein, iron, calcium or other essential parts of a healthy diet," said Clark. "Advice from a dietician or nutritionist can help families weigh the risks and benefits to determine practical options for teens looking for a healthier lifestyle."

The Mott Poll report was based on responses from a nationally-representative group of 910 parents who had at least one child between the ages of 13 and 18.

More than half of parents of sleep-deprived teens blame electronics