More than half of parents of sleep-deprived teens blame electronics 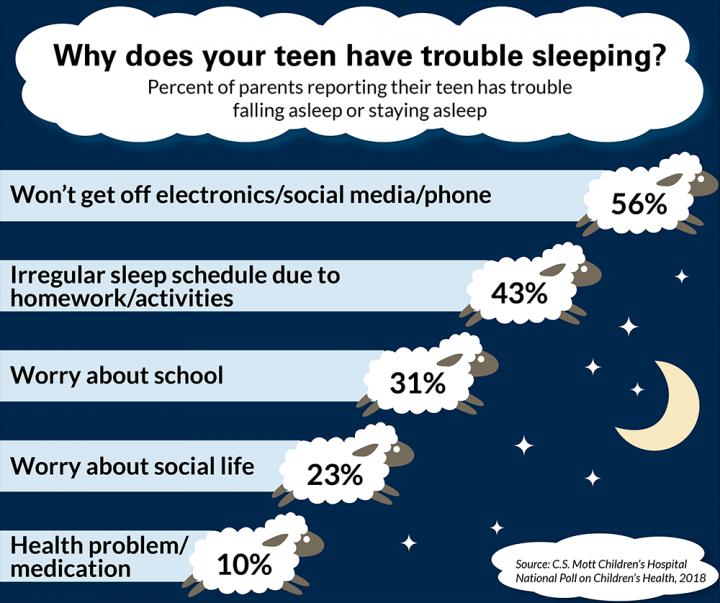 It's no secret that many teenagers stay up late to scroll through social media or catch up with friends on phones.

And 56 percent of parents of teens who have sleep troubles believe this use of electronics is hurting their child's shut-eye.

Forty-three percent of parents report that their teen struggles to fall asleep or wakes up and can't get back to sleep, according to the C.S. Mott Children's Hospital National Poll on Children's Health at the University of Michigan. A fourth of these parents say their child experiences occasional sleep problems (one to two nights per week) while 18 percent believe their teen struggles with sleep three or more nights per week.

Not being able to stay off electronics - including social media and cell phones - was the no.1 reason parents cited for sleep disturbance.

Other reasons included irregular sleep schedules due to homework or activities (43 percent), worries about school (31 percent), and concerns about social life (23 percent). Ten percent of parents say their teen's sleep problems are related to a health condition or medication, cited more often by parents of teens who experience frequent sleep problems.

The new report is based on responses from a nationally representative household survey that included responses from 1,018 parents with at least one child 13-18 years old.

"This poll suggests that sleep problems are common among teens and parents believe late-night use of electronics are a main contributor," says poll co-director Sarah Clark, M.P.H.

"Teens' hectic schedules and homework load, as well as anxiety about school performance and peer relationships, also are seen by parents as contributing to sleep problems."

Parents polled say they've encouraged their teen to try different strategies at home to help with sleep problems, including limiting caffeine in the evening (54 percent), turning off electronics and cell phones at bedtime (53 percent), having a snack before bed (44 percent), and natural or herbal remedies, such as melatonin (36 percent). A quarter of parents (28 percent) say their teen has tried some type of medication to address sleep problems.

Forty percent of parents of teens with frequent sleep problems, and 22 percent of parents of teens with occasional sleep problems, say they have talked to a doctor about sleep struggles. Parents who have consulted with doctors say the top recommendations from experts included turning off electronics and cell phones at bedtime (72 percent), adhering to a regular sleep schedule (64 percent), limiting caffeine (47 percent), and taking natural remedies (42 percent).

"Parents whose teens continue to have frequent sleep problems, despite following recommendations for healthy sleep hygiene, may want to talk with a health care provider, particularly when considering which type of medication to try," says Clark.

"Inadequate or disrupted sleep can have long-lasting health effects that go beyond moodiness and irritability for teens," Clark adds.

"Sleep-deprived teens may have difficulty concentrating in school and those who drive have an increased risk of auto accidents. Inadequate sleep has also been linked to health problems ranging from obesity to depression.