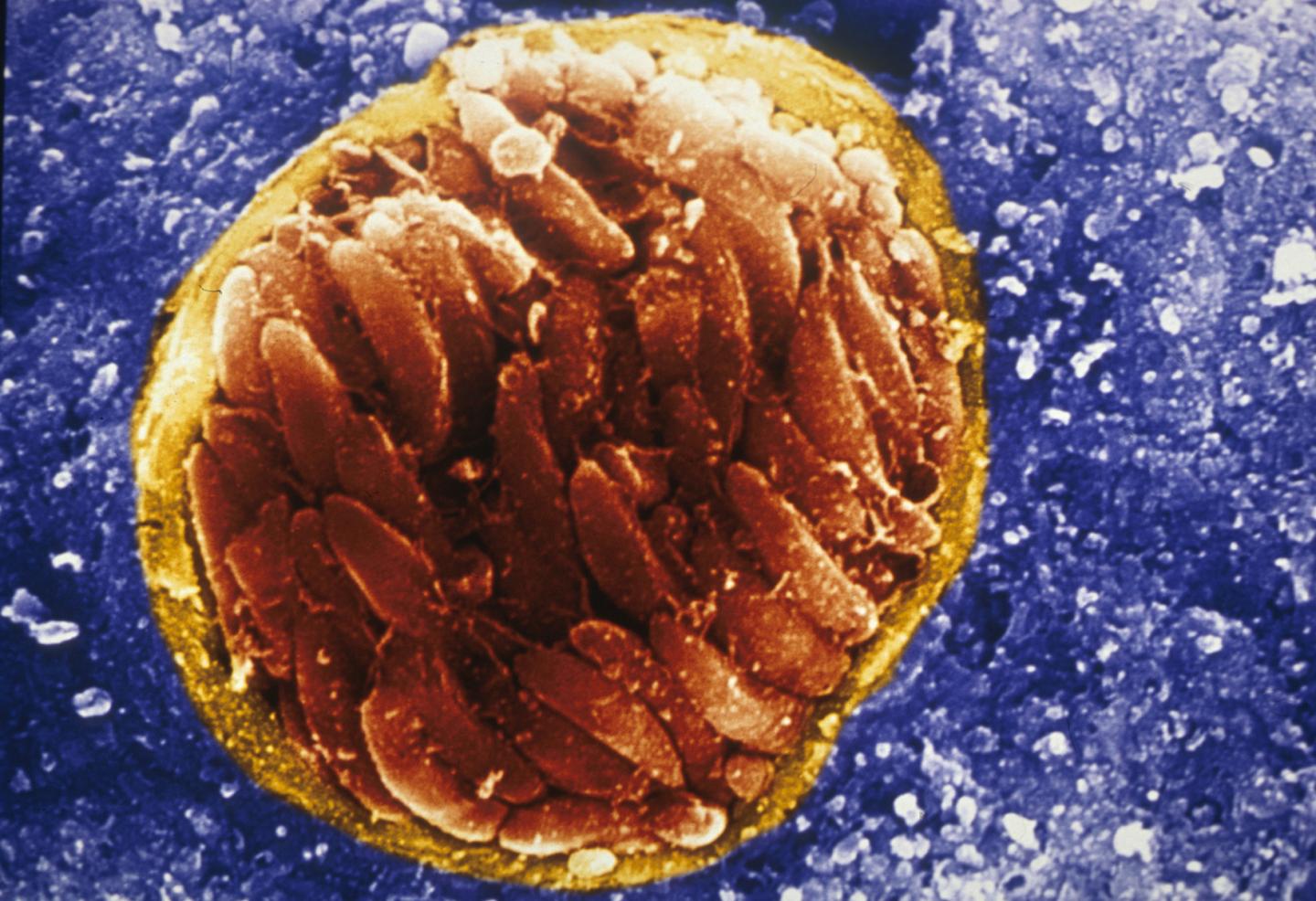 In a study involving 358 adult subjects, a team led by researchers from the University of Chicago found that toxoplasmosis, a relatively harmless parasitic infection carried by an estimated 30 percent of all humans, is associated with intermittent explosive disorder and increased aggression.

The findings are published in the Journal of Clinical Psychiatry.

"Our work suggests that latent infection with the toxoplasma gondii parasite may change brain chemistry in a fashion that increases the risk of aggressive behavior," said senior study author Emil Coccaro, MD, Ellen. C. Manning Professor and Chair of Psychiatry and Behavioral Neuroscience at the University of Chicago.

"However, we do not know if this relationship is causal, and not everyone that tests positive for toxoplasmosis will have aggression issues," Coccaro said, adding that additional studies are needed.

As part of their pioneering research to improve diagnosis and treatment for Intermittent Explosive Disorder (IED) and impulsive aggression, Coccaro and his colleagues examined possible connections to toxoplasmosis, an extremely common parasitic infection. Transmitted through the feces of infected cats, undercooked meat or contaminated water, toxoplasmosis is typically latent and harmless for healthy adults. However, it is known to reside in brain tissue, and has been linked to several psychiatric diseases, including schizophrenia, bipolar disorder and suicidal behavior.

The research team found that Intermittent Explosive Disorder (IED)-diagnosed group was more than twice as likely to test positive for toxoplasmosis exposure (22 percent) as measured by a blood test, compared to the healthy control group (9 percent).

Around 16 percent of the psychiatric control group tested positive for toxoplasmosis, but had similar aggression and impulsivity scores to the healthy control group. Intermittent Explosive Disorder (IED)-diagnosed subjects scored much higher on both measures than either control group.

However, the authors caution that the study results do not address whether toxoplasmosis infection may cause increased aggression or Intermittent Explosive Disorder (IED).

"Correlation is not causation, and this is definitely not a sign that people should get rid of their cats," said study co-author Royce Lee, MD, Associate Professor of Psychiatry and Behavioral Neuroscience at the University of Chicago. "We don't yet understand the mechanisms involved--it could be an increased inflammatory response, direct brain modulation by the parasite, or even reverse causation where aggressive individuals tend to have more cats or eat more undercooked meat. Our study signals the need for more research and more evidence in humans."

"It will take experimental studies to see if treating a latent toxoplasmosis infection with medication reduces aggressiveness," Coccaro said. "If we can learn more, it could provide rational to treat Intermittent Explosive Disorder (IED) in toxoplasmosis-positive patients by first treating the latent infection."

Wow, who would have known? Here is another article I found that adds other findings......
http://www.ncbi.nlm.nih.gov/pmc/articles/PMC3488815/
It is intriguing.........
I wonder if it will lead to testing and treatment?
Thank you for the share Runawaybunny, very interesting indeed.

It's more likely to lead to a pogrom against cats in the US. I've had cats since I was 18.

I tested positive for toxoplasmosis at 24 when going through fertility planning. I am bipolar due to inheriting it it. I am not schizophrenic. I do not suffer from any rage or disruptive disorders.

My toxoplasmosis is only a risk to me if I become severely immune compromised. My husband also had toxoplasmosis, likely also contracted from cats, though he, like I, ate undercooked meat.

Towards the end of his life, when he was severely immune compromised, the toxoplasmosis did affect his eyes. It quite commonly causes eye damage up to the level of blindness in AIDS sufferers, though husband did not have AIDS.

I am sorry that this was so with you and your husband. I have had cats for my entire life. I wonder now about my two girls.......hmmmmmm.

toxoplasma is actually a pretty cool bit of evolution. It's primary host is the cat.

It gets into cats by infecting rodents. Once in the rodent, it travels to the brain. In the rodent's brain, it changes functioning so that the rodent is no longer instinctively afraid of the scent of cat urine.

This makes the infected rodent extremely vulnerable to being eaten by a cat, thereby getting the toxoplasma parasite right where it needs to be in order to reproduce.

Humans are a dead end host. The parasite can reproduce in our nervous system, but cannot make it back to our digestive system so it can be shed to continue the life cycle.

Toxoplasma is why for many years they have been saying that women who are or are planning to become, pregnant, should not have contact with cats' litter pans, and should avoid gardening as everyone knows stray and feral cats love to toilet in dug up soil.

Rage and agression are controlled by much the same primitive areas of the brain as those that control fear, so it's not surprising that those centers are affected in humans.

I should be interested in immune and receptor studies in those individuals displaying rage syndromes who also show active t.gondii infection. I suspect it takes more than just infection with t.gondii to cause those effects.

Let me correct that. T.gondii encysts in muscle tissue, that's how rodents and undercooked meat spread it. cysts are also shed in the feces, which is how humans are infected by cats.

I supposed that if one ate an infected human, there would be muscle cysts that would be infective provided the human muscle tissue was not properly cooked.

Given the fairly universal taboo against eating human flesh, at least in the Western world, I would suspect that that mode of transmission is rare.

Cattle and other meat animals get it by ingesting rodent feces while grazing.

GoingNorth said:
I suspect it takes more than just infection with t.gondii to cause those effects.
Click to expand...

I wonder what effect treatment would have, if any. Is the damage done reversible? The treatment also seems harsh. I read that it can reactivate in our bodies when we are immune compromised. Interesting........

An encyclopedia, hunh? Wait until I turn into a theasaurus on you guys. That's what happens when you have a uselessly high IQ, are mostly self-schooled, are unable to work, and have difficulty communicating socially.

I expect treatment would have to be harsh. It would have to get cysts, which are designed to survive various traumas, and also cross the blood-brain barrier to get live and encysted forms, hopefully without doing damage to brain tissue or chemistry.

There would also be the risk of a powerful immune reaction to dead protozoans or cysts that could damage CNS tissues as well.

GN, you are an amazing person nonetheless. Thank you for being here and sharing your knowledge, it is much appreciated. I love my thesaurus by the way.........and I think you communicate wonderfully here.
(((HUGS)))
leafy

I wonder too, about dogs, who view cat poop as a delectable treat.......ewwwwwww.
leafy

Dogs love cat feces because cats require a really high protein diet. The reason cats require so much protein is that they are inefficient digesters.

All that partially digested protein not only makes cat poop smell and taste really good to dogs, it makes it nutritious to them.

Unfortunately, it does mean that parasites can be passed from cats to dogs, the most common being roundworms. Years ago, I used to do my own fecal floats on my critters as opposed to having the vet do them. I occasionally found cat roundworm eggs in my dogs. Luckily, good ol piperazine, a commonly available wormer, gets roundworm eggs in both species.

I do not know if dogs are succeptible to t.gondii or not. I'll have to check on that. I've never heard of a dog being tested for it, but that may just mean that it has no effect on them. I do know that there are several other protozoan parasites that dogs and cat both are succeptible to (along with other genera) such as coccidia and giardia. Humans are succeptible to the latter as well. Like animals, we usually get it from drinking contaminated water.
Top