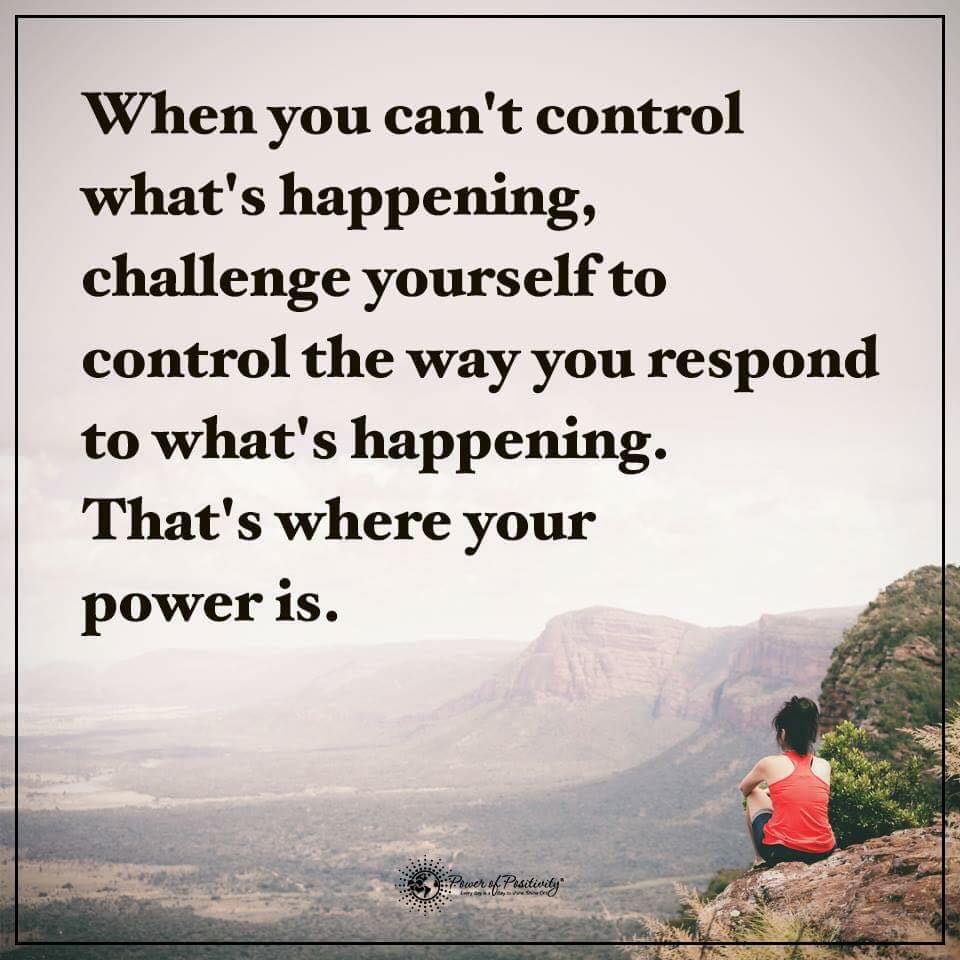 Thank you RE. I had a perfect example of this about 5 days ago.

I was very overwhelmed with work (newly resumed after 3.5 year "break.")

And not one piece of the issue, as I could see it was my fault. Just my responsibility. I had been given an impossible amount of assigned work, without repeatedly promised training to a new system, forms, and computer program. In 3 of 4 workdays, each with multiple newly assigned patients for whom to perform evaluations. Yet they kept heaping on more work. To fail to meet deadlines for the work, is in effect, breaking a law. If something happened to one of these people, I would be the only one responsible.

Last weekend I became exceedingly anxious. And M told me: you have to change or leave, because you have no control over your bosses or the environment. You cannot make them change.

He kept telling me I was acting like a victim, a martyr. To not take responsibility for which I could not control. I could understand the words theoretically, but not with respect to my own situation. When I blamed "them" M got pissed. He kept insisting I needed to take responsibility for "me". By that time I was thoroughly confused and getting frustrated with HIM.

When Monday rolled around I knew I had to act. Because as I was going, I was allowing myself to be victimized and to be put in a situation of great potential risk, and even failure.

So this is what I decided to do (I first created a thread and got wonderful support.)

I have 3 supervisors who have the same job duties and level of responsibility over me. I knew that talking with one would be the wrong thing to do. I had to talk to all 3, together.

Two were at work. Two men.

I said this, more or less:

I am in a train wreck and the cars keep coming.
I have been promised training by you repeatedly that has not been forthcoming.
On 3 days this week (of 4 I work) I have been assigned work when I have not been here, through no responsibility of mine.
I am taking responsibility to do this work and I need your support.

What do you want us to do, sit with you all day?

I answered. This conversation will now transition to the topic of my giving notice.

What had changed was me.

First, I made public what was happening to me. I stated the truth, and with that I no longer had to control, take responsibility, endure all of it. It became something outside of me--not about me.

Second, I invited them to either participate with me on a solution or not.

In that moment, one of them, decided to mock me. In my answer I made it clear I would not accept this.

After I set the limit, they both scurried back in line and there were no more transgressions by them.

I continued: I am willing to do my best, understanding that I will be training myself, with the following request:

No new work assigned until I catch up with what I have got now. (To present the cases in a meeting later that week.)

I worked very hard. My ill-feelings about myself and in myself abated--I presented the cases (my first time in this prison, with a new system.)

It was said I did very well, especially surprising because I was "new."

The moral of the story: My power is in how I respond.

I am not exactly sure why would I did worked so well for me (internally), but it did.

Now, I have much more work to do. On me. Because this "success" had some unfortunate consequences. One of the men, when we were alone, in a joking way, described a personal attribute I have in a disparaging way.

He called me "reactive" -- and later changed it to expressive. I do not see him as having to right to diagnose me at work, and I should have said that.

They are uncaring, knowing I am dependent upon them to leave. It was past time to leave, and I have no keys to get out. They are uncaring and indifferent that M, over 60, waits in a hot car in the hot sun. I am not.

Not only did I not call him on it but I spent the next workday undoing myself--and giving this person, and potentially others to think of me as "less than" or vulnerable. It seems like I had to build up the tension in myself again, by giving them weapons to use against me.

I will keep this front and center this week, and try to find a way to shore myself up. I understand that it is me, where the damage was done. It feels like how they think about me. But it is really how I think about myself.

Thank you RE. (I may well now make a new thread on how to approach this new challenge. How to not undo myself, after I have found my power.) Thank you.
Last edited: Jul 3, 2016
B

Yep, it's on us And we don't always get the results we want, but if we don't then we still have to decide how we respond.

I never had a negotiable job in my life...so I could work or not work. Having power there wasn't going to happen. My jobs were unimportant and replaceable and if id fussed over anything, i would have been shown the door...lol.But I'm glad it worked for you, copa. You were STRONG, girl . I decided that my identity would be as a mother. So it was And that could have backfired badly. I expected total failure.


But i got stronger.

It was in my personal life where I had power and learned how to use it. Today I am on great terms with everyone I love except for Goneboy (not everything goes your way, but I did at least set boundaries and it felt good).

The idea that me, life's misfit, would end up beloved by so many was unthinkable to me as a young woman. Everyone mistreated me and I let them. I expected it. I didn't know how to be anything except a losing oxymoron. ..a rebel who talked back but, in the end, gave up and hid and believed I deserved a terrible life. I thought everyone would leave me because I was not worthy.

Thank God for those who taught me to think differently. It is because of them, I am here today, surrounded by loving family.

It sure did not seem that my life would ever turn out this way. We can be kind, but we also need to have confidence and feel I'mworthy and expect to be treated with respect. Took me a while, but if you don't treat me with respect, I don't want you around me..and, yes, I feel it's your loss. I finally got to this point. I even feel that way about my jobs or volunteering. Hey, I work hard. If you don't want me, I no longer care. Goodbye.

Thanks for the reminder, RE. We do have power over how we respond and it matters.
Last edited: Jul 3, 2016

I hate it when you talk this way about yourself. Except that I understand, you do so in order to convey to yourself and others the transformation you have made yourself.

SomewhereOutThere said:
Everyone mistreated me and I let them.
Click to expand...

SomewhereOutThere said:
I thought everyone would leave me because I was not worthy.
Click to expand...

Well, SWOT, this is the piece that I forgot to talk about in my new thread and I will now lift this quote of yours to post about it, in relation to my own self. Thank you, SWOT and RE.

M
Where Will It End?

L
Positive update, for me at least :)