Jumper and our update and would love to hear your update

She graduated in Criminal Law and just applied for a Corrections job at the jail in my town. She has references from three policemen, two being her teachers. She also has a friend who works there. Good pay, amazing benefits...if she gets the job she will not go to Police Academy right away. She goes to Jail Academy instead. We are very proud.

Her and her fiance are closing on their house in a few days. Such a nice place for a first house! We may be able to go in and see it for real during our Christmas celebration if they have the key by then. Then all of the Wisconsin family (Sonic, us, and my sis in law and bro in law can see it. I am excited about our Christmas. Hub's sister has become like my real Sis and Jumper adores her. Bro in law is a sweetie. We will really miss them when they move to Alaska to be near their daughter.


We are going to buy something next spring and it will be close to her place. Hub retired in March. That is OUR update. We start RVing next winter.

In two weeks Jumper, J fiance, Sonic and me are heading out to see Princess and little Princess (can't wait) to have a late Christmas. It just worked out that that was the earliest we could go
Should be fun!

Happy holidays to all!! Truly praying (for those who believe in prayers) that your holiday rocks, even if you have struggling adult kids. To those who do not pray, Happy Solstice!!!!

We are heading to south Florida early Saturday morning for four days. We already celebrated with our boys so are looking forward to some sun, sand and seafood. We had originally planned to see our Difficult Child and spend Christmas with him but he is in a wonderful program so we are going to just enjoy us.

Merry Christmas to all and I wish you all peace.

Oh, RN, so happy for you and so full of hope for your son!! Relax, enjoy, enjoy, eat, drink and be merry!!

Staff member
It's been a long year for us. My Mother in law passed away in January so much of this year was spent cleaning out her house. It sold on Oct 31st. It's been kind of strange this holiday season without her. While she will be missed we have all relished in sharing out memories of her and we all agree that she had a nice long life.
Hubby and I will drive into Chicago on Sat. to spend the day and night with his sister then drive home for a quiet Christmas, just the 2 of us. I'm sure next year we will be back to hosting a large crowd at our house but this year, I'm enjoying the slower pace and quiet.

SWOT, so happy for Jumper! She's going to jail but in a good way!!

Wishing you a very Merry Christmas and a Wonderful New Year!! 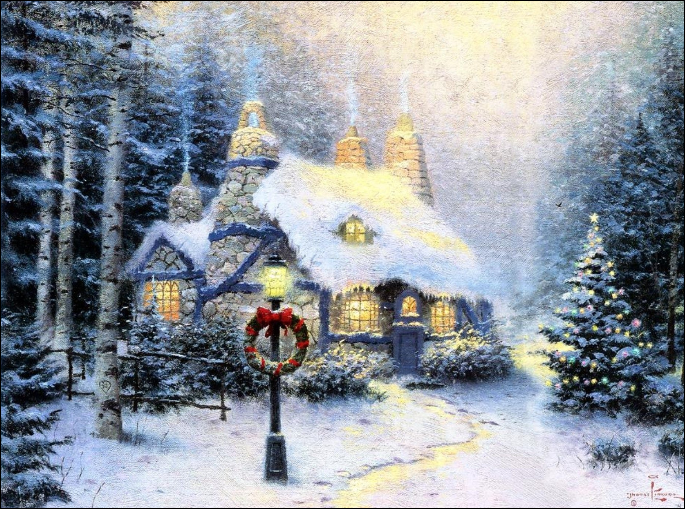 Shooting from the Hip

It's going to be a very quiet Christmas this year and I love it! Mom and Dad both beat cancer this year - Mom's was in her palate and Dad's in his lungs - and of course we've dropped the number of kids down to ONE. Love the others, just won't let them ruin our lives any longer.

So we are doing a drive-thru light thing tomorrow night (late birthday for me), Rose is spending the night with my parents so Bill & I can have a date night. Saturday, Rose and the 'rents will take cookies to the police and fire departments as they do every year! Sunday we'll go to their house for New Mexican chile and farolitos, then Monday they're coming to our house for present opening. Nice and quiet!
F

Both holidays sound wonderful. Annie, prayers for both your parents.

Would that be Hatch Green Chile?

What a great update SWOT have a very Merry Christmas!
Annie, Tanya and RN May your holidays be filled with peace and joy!

We got home from Mexico today. We are going to stay in a Hotel in Toronto and visit the Aquarium on Christmas Eve and then have Christmas lunch with Santa. Son is welcome but I refuse to let it ruin our Christmas if he chooses not to.

It is just us 3. My sister is far away and busy with her family. Hubs family are all in England. My mom passed this year and my dad last. So we chose non traditional and fun! Our gift was our trip

Wishing all of you a very Merry Christmas and happiest of all holidays!

Staff member
Looking forward to a quiet Christmas. We will have sister in law, brother in law, niece and her husband for dinner.

It's been mostly a good year. difficult child is doing well. He is working three jobs and volunteers at a daycare. I still always wait for the other shoe to drop. We are in the midst of applying for Social security for him. He has been denied once and I worry for a lot of reasons what will happen if he doesn't get it. My biggest worry is when he is no longer on our insurance how he would possibly afford them.

easy child/difficult child will graduate in May and then do her internship over the summer. She suffers from lots of anxiety and depression but currently is doing well. It's great having her home for break.

husband has been diagnosed with Type 2 Diabetes. He is eating healthier and seems to be handling it will.

I'm still teaching and now have a part time job to boot. I have a wonderful class this year!

Wishing all a Merry Christmas.

Shooting from the Hip

Tanya M said:
Would that be Hatch Green Chile?
Click to expand...

Actually, yes Hatch, no to green... It's red, that we made from the dried pods. That made me think of the salsa verde I made from the green that we got a couple summers back... I still have some green, diced up & home canned (my hobby LOL). I should make some more for huevos rancheros on Monday, to go with the ham and eggs and hollandaise... Now I'm hungry.

It has been a weird year. Some things have been great and others awful. And December has been TERRIBLE!

First Jabber and I were both sick, him with sinus and me with bronchitis/sinus both.

Then our beloved little Suzie Q.

Then I had my gallbladder go nuts. I don't think I've even mentioned that. The same day we lost Suzie, that night I start getting this horrible back ache and stomach ache. Next day I went to the chiropractor, thinking it was my back. Day after that, I again when to the chiropractor. Day after that I went to the M.D. Next day, ultrasound. Diagnosis: Gallbladder - Go to surgeon.
Well yesterday I went to the surgeon - he freaks out at a rash on my side which I - AND the M.D. agreed, was a superficial heat rash from the heating pads I'd been using on my sore stomach/back/side.

So...This morning, I thought that's it. WORST CHRISTMAS EVER.

It's so not. Really, I've had much worse when my kid was home and I thought it would be pleasant and he ruined it. But this one still isn't as bad as I felt earlier.

After all, we're alive and ... well, not well, but okay. LOL! We'll live. But better yet was my text today. I wish I could share it with you. My son...my pothead slacker son...sent me a picture of himself in a UNIFORM, wearing a BADGE!

Now don't get too excited, he's not a cop. But he IS a security guard! He quit his last job but already had another to go to and since it doesn't start until after the holiday he took a temp job as a security guard Christmas day! He may go full time later. Seriously, it is the most amusing and most unexpected thing I could have ever have seen and made my MONTH!

So, Christmas is coming on a high note. Tomorrow we go to Jabber's brother's house for the "family" Christmas and then we have no plans at all. At some point I imagine we'll make some candy for the care package that didn't get to my kid before the holiday because of the sickness, Monday I hope to see Star Wars.

but it's all good.

But I, who have no right, am so proud of your son. A security guard is something on the right side of the law. Jumper talked about doing that at our Casino if she couldn't get a cop job right after the Academy. I think your son has seen his last bad days and is on such a good track.

Please be well and remember this wonderful blessing!

AnnieO said:
Actually, yes Hatch, no to green... It's red, that we made from the dried pods. That made me think of the salsa verde I made from the green that we got a couple summers back... I still have some green, diced up & home canned (my hobby LOL). I should make some more for huevos rancheros on Monday, to go with the ham and eggs and hollandaise... Now I'm hungry.
Click to expand...

Oh so am I drool!

SomewhereOutThere said:
But I, who have no right, am so proud of your son. A security guard is something on the right side of the law. Jumper talked about doing that at our Casino if she couldn't get a cop job right after the Academy. I think your son has seen his last bad days and is on such a good track.
Click to expand...

Well...turns out he fibbed a bit. He did NOT have a job to go to when he quit. But has did have the temp job today and a few interviews coming up. So, still better than I'd have thought a year ago. I won't complain.

Lil said:
Well...turns out he fibbed a bit. He did NOT have a job to go to when he quit. But has did have the temp job today and a few interviews coming up. So, still better than I'd have thought a year ago. I won't complain.
Click to expand...

I hope you are both feeling better soon. Shingles are nasty. Son is working and that is a very good thing.
The care package can wait. Rest and get better.
F

Liol, things are still going right for your son. I knew there was a good kid under it all. After all, look at his parents! I am still proud of him.

Now you two take good care of your health. Too bad we can't just take off a month for useless goofing off as well as healing, isn't it????

P.s. I can't type the name that is short for Lilian. It auto turns into Lol!

SomewhereOutThere said:
After all, look at his parents!
Click to expand...

If having decent parents did the trick, there would be no need for this group.
Top