Enough of Us: Great article about our expectations for our children

I liked it so much, I want to share it. No comments necessary.

I do agree with every word.

Parent-child estrangement can take many incarnations, not the least of which can be the results of emotional maladies. In Caroline’s case, the relationship between her and her parents is on the mend. Its success will depend upon her continuing treatments and probable lifelong reliance on drug therapy.

But usually disaffections are not clinically explainable. Take the experience of Sadie Epps, in which the parent estranged herself from her offspring. “My mother and I have been somewhat estranged for several years. We speak and email but we have found that being in the same place to be too difficult. There are many reasons for this, but most of them come down to my mother not approving of my life. My mother abandoned my entire family over the past two years, saying we caused her too much stress. We apparently were a burden to her. Never mind that the four of us have all moved out of the house and have successful lives and careers of our own . . . In December she finally divorced my father, cutting all ties to us. I’m a bit bitter about Mother’s Day. I try not to let it show to friends who want to enjoy the holiday. But I do bite my tongue a lot.”

In our book, Enough of Us: Why we should think twice before making children, we discuss at length the reasons people have kids and the expectations they have for their offspring, including the nature of their relationships. We point out that frequently those great expectations lead to dashed dreams.

Carl Jerome writes that he too is bitter about Mother’s Day. In referring to Sadie Epps’s resentments, he says, “Especially when people post inane things on Facebook about how you’ll never know another love like the love for a child.” We think the question is, “How long will that love last when the emotional return on investment wanes?”

Wilma Dandridge takes a step farther when she writes: “I’m the same about ‘The family always supports you and are there for you,’ and similar claims. I grew up in an abusive (physical and emotionally/mentally) home with my father being the main abuser but also my brother (part of my father’s abuse was to give my brother certain power over me that enabled that abuse).”

Wilma goes on: “Last year all of my family except my parents severed contact with me. I know that when my parents are gone I will be alone in that regard.”

Estrangement can go in three basic directions, it seems: upward from child to parent; downward from parent to child, and laterally between siblings. In any case, making children often leaves parents in very disappointing, if not heartbreaking, relationships.

Unfulfilled Dreams: Parent-Child Estrangement
May 7, 2012 By Ellis and Cheryl Levinson 112 Comments
Most parents dreamily anticipate how meaningful life will be when they become grandparents. They have visions of being proud guests at their offsprings’ weddings and holiday celebrations. Grandparents who love to host, imagine roasting a succulent turkey for their children and grandchildren for Thanksgiving dinner. And for the winter holidays they imagine their cups will runneth over at joyful family get-togethers.

In our book, Enough of Us: Why we should think twice before making children, we include a chapter on the problems that children inflict on parents. While kids often bring much joy to their parents and grandparents, there are no guaranties; not nearly. And often the inflicted damage is traumatic.

For many parents, what they are anticipating is really a move to an ideal land, but one that requires a reality check at the border. There are many parents who will never experience the longed-for fulfillment of that lovely family vision because they have an estranged adult child or children. There are web sites devoted to such a syndrome and a list of books related to the topic of estrangement with titles such as When Parents Hurt by J. Coleman and Family Estrangements: how they begin, how to mend them, how to cope with them by B. Lebey.

Parents in this predicament are generally bewildered, sad and guilt-ridden. They spend time working to “fix it,” and eventually try to accept their child’s emotional distance. (www.estrangedparentsofadultchildren.com).

Ellis’s mother experienced such trauma in her relationship with him. Their relationship had been an unloving and bitter one for most of his life. At age 31 he decided that their relationship was too toxic for his own well-bewing. For two years he did not speak to her. It was only when he was getting ready to move from New York City – where his mother also lived – to Los Angeles that he called to say good-bye. Those two years were a difficult time for his mom. (Just a footnote – eventually things turned around and his mother moved to Los Angeles to be near him and Cheryl).

The worst instances of estrangement are when children cut off their parents without explaining why. “Estranged adult children are individuals who all of a sudden do not respond to email messages, do not return phone calls and stop coming over.” When parents attempt to meet face-to-face, their child refuses to relate to them. Most of these parents thought they had a good relationship with their adult child; hence their bewilderment about being so thoroughly rejected. 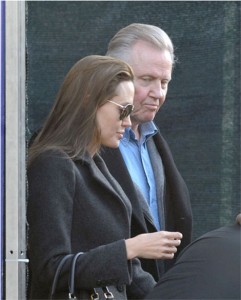 Jon Voight happily reunites with daughter Angelina Jolie after she cut him off for seven years. Photo: YourCelebrityStuff.com.
(www.estrangedparentsofadultchildren.com/Site/Stages.html)

An article in the April/May issue of AARP The Magazine, examines the problem of children “divorcing” their parents. The article, “The Stranger in Your Family” by Meredith Mara, postulates that apparently there has been a rise in parent-child estrangements, which may be related to a couple of factors.

According to San Francisco psychologist Joshua Coleman, “The high divorce rate means fewer children see themselves as part of an unbreakable family unit.” Coleman also blames our culture’s “me-first mentality,” which supports individual fulfillment over tradition or a sense of duty.

Mara interviewed Elizabeth Vagnoni, who is estranged from two sons. Vagnoni conducted a survey of estranged parents for her web site, Estranged Stories (www.estrangedstories.com). The survey indicates that almost one out of three parents estranged from their children has considered suicide. Vagnoni points out that when the primal bond between parent and child is broken, “parents feel they’ve failed as a human being.”

Vagnoni’s survey solicited responses from alienated children as well. Sixty-one percent said they would resume a relationship with their parents only if specific conditions were fulfilled. Sixty percent wanted their parents to apologize, and almost half said they bore “no responsibility” for the estrangement.

Whether these offspring are wrong or right in their decisions to distance themselves from their parents, the fact remains that children come with no promises. Would-be parents who believe they will be fulfilled at some time when their kids are grown may want to take another look at their own expectations, as well as think twice before making children.

Kahlil Gibran, author of the classic book The Prophet, expresses it best in this passage from “On Children”:

And a woman who held a babe against her bosom said,

Speak to us of Children.

They are the sons and daughters of Life’s longing for itself.

They come through you but not from you,

And though they are with you yet they belong not to you.

It is important to keep in mind that parents do not own, nor can they control, their adult children – thank goodness. There are no guarantees of happy endings.

My comment: I am glad I did not have expectations for my kids, other than they be productive and happy. I did not even consider things like estrangement or not filling my goals, etc. Most of my parenting experience has been very satisfying, but, as you all know, I had my moments.

B
Parents who are estranged from their children

Yet another meeting with Borderline (BPD) team

B
Adopted adults have more problems....