OK! I am sort of live and let live when it comes to spiders. I tend to capture them and release them outdoors if I can.

I am currently living in a ground floor apartment raised about 6" above ground level on a concrete slab. I nearly had a heart attack when I found a 3" long centipede in my bathtub the other day.

THAT was sent to the great beyond with a slipper and the tub scrubbed. I've got earwigs.

I've also got spiders. I'm evicting several per day, and have been bitten a couple of times already. So far I haven't seen any recluses or black widows, and none of the bites have done worse than leave welts.

I've left a msg with maintenance requesting that they spray the perimeters of the building and entrances/windows for the critters, FWIW, but I'm wondering if anyone has any suggestions to make my house less appealing to the beasties.

I don't want to have to start killing them, but no ten minutes ago I evicted a wolf spider that went trucking across my screen and it's getting a little old.

There is no standing water, no leaks that I can detect, no dripping taps, nothing that I can find that would attract spiders. I am not finding webs anywhere. Screens appear to be tight. There is no vegetation close against the section of the building in which I live and grass is kept short.

I don't want to spray inside due to the cats.

I'm not up for spider murder by any means. I'd just like to convince the dratted things that outdoors is a much nicer place to live than in my apartment.

Hi, I just looked online. There are recommendations to use essential oils inside the house to keep pests away by making a solution in a reusable spray bottle *at dollar store. I lost the proportions but the solution contains warm water, a dash of white vinegar and a few drops of the essential oil.

They say to spray the solution on surfaces where the pests enter.

There are also traps you can make. Try Googling.

Usually if you have spiders, it's because you have other insects. Normally, I'd be focused on whatever these "other" insects are - earwigs and centipedes are two that you mentioned, plus any others you don't know about yet.

First problem is, it may be your apartment - or it may be the building. If its the building, there is much less YOU can do to resolve the problem. Maybe time to get to know your neighbors?

(UGH! I hate living with bugs!)

Lavender would probably be my best bet as the natural oil is non-toxic to cats and I can actually tolerate the smell of it (like it, actually) I'll have to give that a try.

So far, I am seeing them all over the place, including in my bedding, which is way out of line on the spiders' part, even for me, who is relatively spider-tolerant.

There is currently another rather substantial wolf-spider wandering around on the wall above my kitchen sink. It is large enough that I can see it from my dining area which is about 12 feet away.

Lavender oil is probably my best bet as it is non-toxic to cats in it's natural form (comparatively) and not a strong repellent.

Citrus and citronella are repellents. Ti-tree oil is toxic, and most other essential oils are, at best, potent irritants.

Well, I haven't seen any other insects other than the earwigs and the one centipede.

My food supply is on "roach proof lockdown" as this appears to be the first apt I've lived in that doesn't have the damned things, and I have no intention of acquiring them if I have any say in the matter.

The wolf spiders interest me as they are "stalking" hunters as opposed to web-hunters, and if they will go after any additional centipedes, I am willing to share quarters with them.

The other spiders seem to be your standard issue "house spiders", which are probably what's bitten me that couple of times.

Staff member
YUCK! Don't care for the creep crawlies. I have heard the same thing about essential oils but I do know that peppermint oil can be toxic to cats if ingested and also just the smell of it can affect their nervous system. I hope you get them under control.

I don't know if it works or not, and I don't know if you live in a place where they grow, but Hedge Apples (also known as Osage Orange) are said to be an insect repellent. 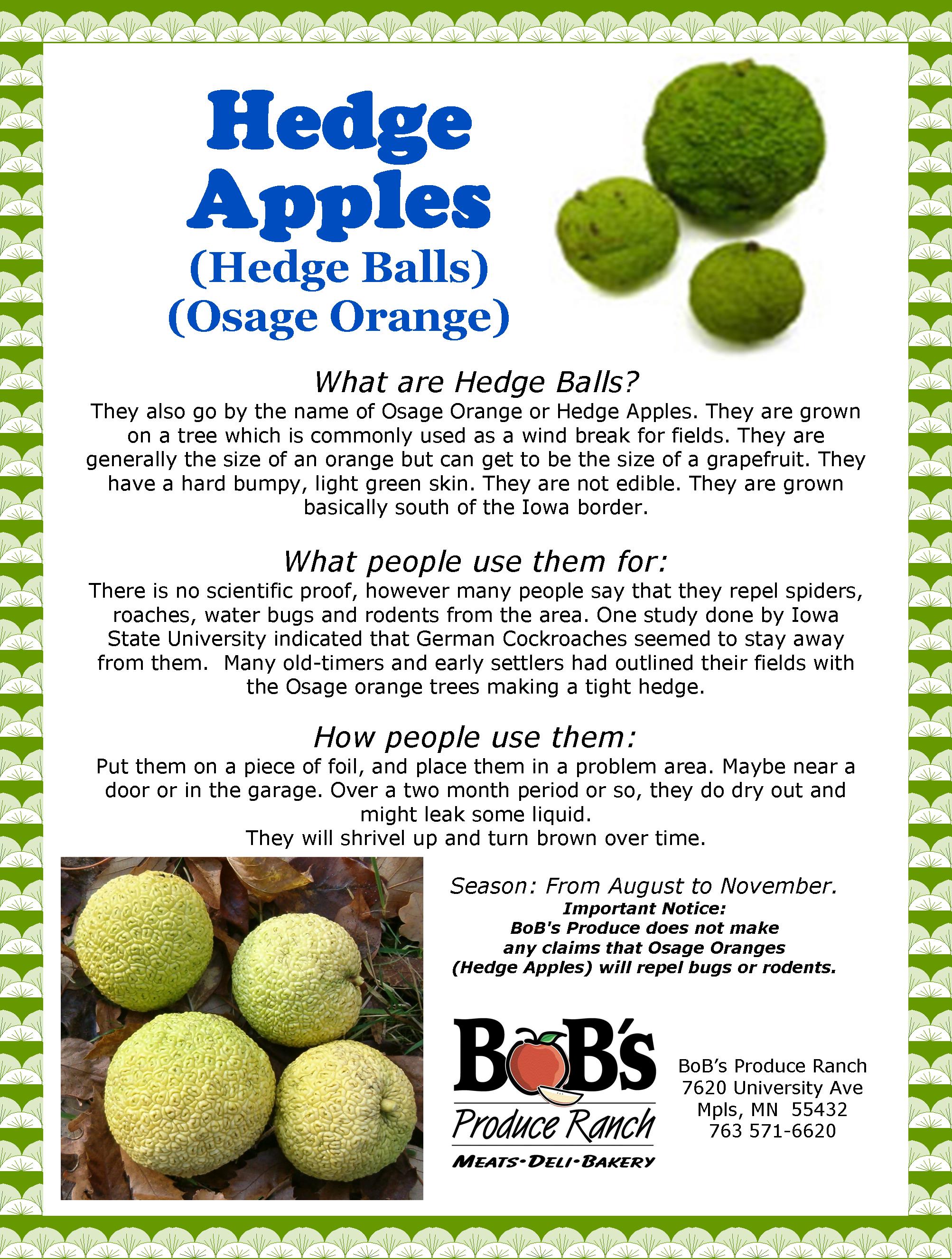 Personally, I'd kennel the cats and spray. I hate bugs.

Hedge apples worked great when we lived in Virginia.

On the other hand I would initially kennel the cats. Spray. Then insert the home remedies to keep them out.

One thing I would ask is how long was your stuff in storage for the move? Being military we move alot. Some things stay in storage for quite a while since they don't fit in the next home or just dont get used often. Earwigs love cardboard and paper. We have found them even when doing short moves because the boxes are often stored for a while prior to being used for packing. The bugs are in them when you get them. I have also found that spiders are pretty common too. Especially if your stuff was in a storage facility all that warm dry peaceful space is great for them.

GoingNorth said:
The wolf spiders interest me as they are "stalking" hunters as opposed to web-hunters, and if they will go after any additional centipedes, I am willing to share quarters with them.
Click to expand...

There is something very wrong about a spider so large he does not require a web.

Now, on the off chance that I haven't scared myself enough thinking about you sleeping in the same house with a non-web requiring spider...what is an earwig?

They are known for speed and jumping ability. The ones we get around here max out at a little over an inch including legs. Not too humungous.

Earwigs are hideous, prehistoric looking insects that feed on decaying plant matter, which includes rotting paper, etc. They are actually harmless, but the males are possessed of a fearsome-looking set of pincers on the rear that are actually used to grasp the female during mating.

My stuff was in storage for 6 weeks, and yes, you guessed it, indoor, climate-controlled storage, so it's likely it got infested there.

I won't spray if I can avoid it. I've gotten the boxes out of here. Have resorted to killing the house spiders due to having gotten sick of getting bitten, and seem to have evicted the last of the wolf spiders. (Either that or they left due to lack of food--wolf spiders like to prey on other spiders, and probably came in to eat the house spiders.)

I know it isn't true about earwigs...but did anyone ever see the twilight zone episode where they put an earwig in the guys ear and he survived it burrowing its way thru his brain...only to find out it was a female and laid eggs?


That was the single most horrible TV show I've ever seen! I can never think of anything else when I hear the word earwig.


Lil said:
That was the single most horrible TV show I've ever seen! I can never think of anything else when I hear the word earwig.
Click to expand...

I knew it! I thought I remembered there was something horrible about that word, earwig.

Even worse, I think I have actually seen one.

I am glad I did not know what it was. Or what it was called. But something tells me I will probably be thinking about them, tonight.

I am glad to know those pincers on the end of them are for mating purposes.

I remember being told the "old wives' tale" tale about earwigs as a small child about earwigs, but it was immediately followed up by a scientific debunking of said tale.

I've never been afraid of the things. I'd as soon not have them in the house as they can do some damage by eating glued carpet backing, and the like, not to mention just being plain hideous.

L
So many sleepless nights...